After being axed six years ago by some foolish and out-of-touch with reality execs at the FOX channel, the series has been picked up by some obviously smarter, hipper and probably better dressed people over at CC.

The series aired in re-runs for years on Cartoon Network’s Adult Swim, then Comedy Central. A few years ago the creators decided to produce four movie-length DVDs continuing the Futurama story, and the DVDs and continued airing on Comedy Central did so well, the show got picked up for a brand new, galaxy-ripping season.

When it comes to Retro style TV shows, there hasn’t been any in the last 10 years that compare to Matt Groening and David X. Cohen’s “Futurama”. The show hurls an average pizza delivery boy 1000 years into the future, only to find that it looks a lot like the 1950’s. Heck, even the name is a throwback to the ’50s…Motorama was Detroit’s major yearly auto show where they showcased futuristic cars! It’s even drawn in a retro, mid-20th century style of comic art.

The pilot episode debuted in March of 1999, and showed our favorite dumbass, Fry, delivering a pizza on New Year’s Eve. Just as New York is about to welcome in the year 2000, he accidentally(?) falls into a cryo-cell and is frozen – and forgotten – until the year 3000. But the year 3000 isn’t anything like our contemporary ideas of the future. Instead, it looks more like a scene from a 1950’s B-rated space movie, complete with robots (they call them robots, not cyborgs), aliens, and hovercrafts with tail fins and lots of chrome. 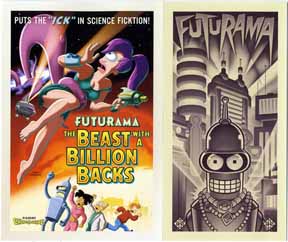 For anyone who enjoys retro stuff, this is the show to watch. The writers manage to squeeze all kinds of references to mid to late 20th century pop culture into the episodes, going as far as to resurrect the heads of musicians, actors, and even Tricky Dick Nixon (a major character). The kookie mix of ’50s pop, ’80s references and future technology make it a fun show to watch – and to try to guess where they got the ideas from. A lot comes from Star Trek, mixed with notions from Asimov, Bradburry, Ed Wood, and Taxi. Think Martinis and  Martians. Sci-fi on a…Bender.

Here’s a few references that bust me up…

Season 1, Episode 9: Hell Is Other Robots
Bender ends up in Robot Hell, which is actually in Atlantic City. In the year 3000, there’s still a boardwalk, dilapidated theme park (not on a pier but close), and hookers. They sing a swingin’ song about Robot Hell that would be at home in any Roaring ’20s speakeasy. The heads of the Beastie Boys make a cameo appearance.

Season 2, Episode 17: Bender Gets Made
Bender joins the Robot Mafia. The Robot Mafia is three robots that sound like gangsters from the Bronx. Their spaceship is a flying 1930’s Cadillac, and they shoot Tommy Guns. 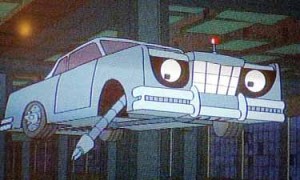 Season 3, Episode 1: The Honking
This one has so many retro references in it, I still haven’t caught them all. Bender travels to some strange, foreign land and is run over by a “warecar”. He then, of course, becomes a warecar. The warecare that runs him over is the 1958 Plymouth Fury from Stephen King’s “Christine”. Bender then turns into “The Car”, a modified ’72 Lincoln Mark IV from an obscure 1970’s movie of the same name (in the movie, The Car is driven by the Devil). When they finally find the most evil car ever made, it turns out to be made of parts of all the most evil cars ever…eh…made…including the steering wheel from Hitler’s parade car, a turn signal from Charles Manson’s VW Bus, and Ed Begely, Jr’s electric engine, the most evil engine ever. The car also happens to look a lot like the late 1940’s Batmobile, with a single giant fin and teardrop grill. Just for the hell of it, a couple of bad-seed robots are seen destroying a hovercar that has lots of chrome and fins, like the ’50s. It doesn’t get any more retro than that, kids.

If you haven’t seen Futurama, see it. It’s available on DVD and Netflix. Watch it from the beginning so you can follow the adventures of Fry from the first pathetic thing he does as a puny Earthling. And if you don’t like it, you can bite my shiny metal ass.