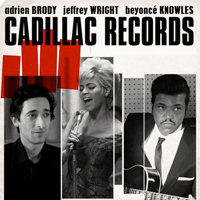 With few exceptions, this movie really takes you back to the era of Rhythm & Blues, and the emergence of Rock ’N’ Roll as grew from unpopular “race” music into the pop standards that define the 1950s.

I won’t give away plot or write a review of the movie, that’s not what this site’s all about. This site’s about kickin’ things that we krazy people who live in the past would find jazzy and hip. This movie isn’t jazzy, it’s bluesy, and very hip. There are lots of scenes of old Cadillacs, great music, and excellent performances by the all-star cast (including Adrien Brody, Jeffrey Wright as Muddy Waters, Mos Def as Chuck Berry and Beyoncé Knowles as Etta James). It’s a fun movie to watch, and even if the history isn’t quite right, it make you feel like you’ve gone back to the days of slide blues guitar and wide whitewall tires.

There are a few goofs in the movie that I suppose the director didn’t care too much about. For instance, they say it’s the year 1955, but show a ’57 Caddy.

Also, there’s something that’s nagging me: The sign for Chess Records is a 45 RPM record that rotates. In the center of the record is a yellow plastic “adapter”, also referred to as a spider, insert, or of course, thingy. I’m not positive, but I’m about 90% sure those yellow plastic thingies weren’t invented until the 1960’s. When RCA first introduced 45s and the 45 RPM record player, they really didn’t want people playing 45’s on other machines. Of course no other record players had a 45 RPM setting until after RCA came out with 45’s, so in the beginning you had to play your singles on the RCA changer, which had a nice fat spindle made for them. When companies started making electronic phonographs that could play 33s, 45s and 78s, 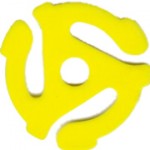 Yellow plastic insert, very 60’s looking. This is now the “symbol” for hipsters that dig 45s, and morons that think they look cool but never saw a 45 in their lives.

that’s when the adapters came into play. I’ve got a nice collection of 45s, and my oldest (some from when 45’s were invented in 1949) had metal inserts in them when I bought them in the 70’s. That seems more 50’s like, since I don’t think that soft,

flexible yellow plastic was used on much (or was even available) in the ’50s. If anyone knows the date those little suckers were introduced, please shoot me a comment with info! 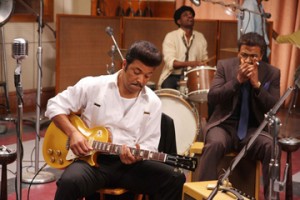 One Reply to “Cadillac Records: An Excellent Movie About The History Of Early Rock ’N’ Roll”