What better way to ring in the New Year than with the greatest New Year’s Eve movie to ever hit the silver screen,
Ocean’s 11, the first (and quintessential) Rat-Pack flick.

The characters in this movie define cocktail-era cool better than anyone…and they should, as Frank Sinatra, Dean Martin, Sammy Davis Jr, Peter Lawford and Joey Bishop practically invented the essence of mid-century coolness, and pretty much play themselves in this liquor-soaked tale. 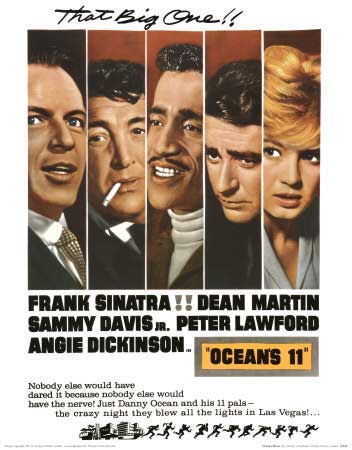 Enter Danny Ocean, the cocky, live-for-the-moment cat who gets a crazy idea in his head to get his old army buddies together to knock-over five Vegas Strip casinos for fun and profit. Using his charm, he talks his (otherwise mostly straight-up) pals into embarking on this rather ballsy scheme. They make the plan over billards and drinks, and make ready to pull it off on New Year’s Eve at the stroke of midnight. I won’t give any more away, in case you ain’t seen it for yourself as of yet.

This flick combines the best the cocktail era has to offer: On-location shots of Vegas, plus cool cars, lots of booze, broads, and songs by Martin and Davis. (But funny enough, not Sinatra) 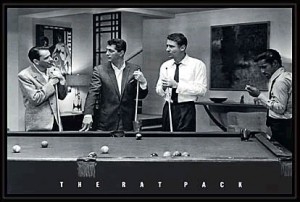 The Rat Pack shot the film in Vegas while working on-stage at the Sands. They scheduled the shoots around the stage shows, and often worked into the wee small hours filming.

It is rumored that when Peter Lawford brought the idea to Sinatra, Ole Blue Eyes said, “Forget the movie, let’s pull the job!”

Shirley McClaine ad-libbed her entire cameo. Her payment was a new car.

Vegas ‘law’ at the time mandated African Americans could not stay in the major hotels. When they tried to make Sammy Davis Jr. stay at a “colored only” motel, Frank stepped in and strong-armed the casino into letting him stay there. This pretty much led to the end of segregation in Vegas Hotels. 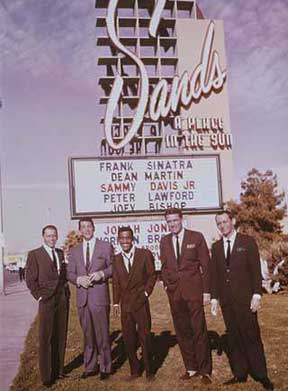 Dean Martin’s movie version of “Ain’t That a Kick in The Head” , featuring Red Norvo on vibes, was much different (but just as cool) as the swingin’ big band version released on vinyl.

PS: For those of you who are thinking of the remake with George Clooney and Brad Pitt…Hey, I think Clooney is just great…but he ain’t no Sinatra. See the original.