Film makers are always trying to come up with groovy new ideas to set to celluloid. Of course, some of the grooviest ideas come from our recent past. Case in point: The new movie Inferno, 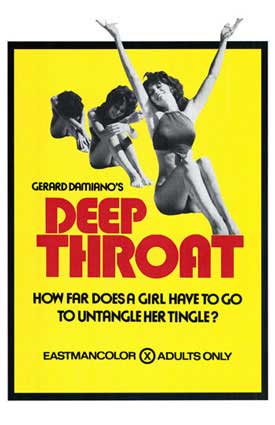 The movie which catapulted Lovelace to fame was the inimitable “Deep Throat” from 1974, the first XXX-rated flick to be shown in regular movie houses across the country. It was banned in many towns for obvious reasons, but had lines a mile long in places like New York City and LA. It was actually a silly comedy, pretty much a spoof on sex in general. It had all the ingredients of a perfect bad movie: Mob ties (for real), 70’s chicks playing parts 15 years younger than they actually were, hairy guys, a previously unknown actress with an incredible talent (can’t say what it is here, but you can guess) and a ‘7o Caddy Eldorado in the opening credits. Oh, and the outdoors were filmed in Miami. Of course.

The movie grabbed so much national attention that the feds formed special anti-American censorship squads to take down the movie and its makers. In the end, they pretty much were only able to unjustly give jail time to one of the movie’s actors. The movie, and the actors, became part of pop history.

I wish Lindsay the best of luck with this flick. I really hope she pulls it off. She’s a pretty kid, and I think she’s a groovy actress, although a lot of kats would disagree with that statement. I’d really hate to see her take the low road and wind up strung out like too many of our favorite talents have in the past. It would be a real drag if she went daisies-up over some junk, like Bird or Marilyn. Too many great jazz musicians kicked from H, too many actors and actresses buried because of the monkey. Good luck kiddo, can’t wait to see Inferno.