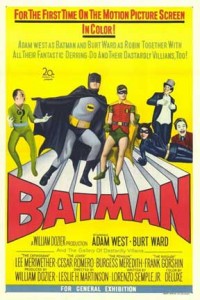 With krazy stuff like shark repellent, a jet-powered Bat Speed Boat, big round bombs and the Batmobile, there’s no way

was going to slip through Mod Movie Monday! For those of you who think Micheal Keaton made the first Batman movie, take a little history lesson from the Tiki Lounge. Back in 1966 Adam West, the 60’s TV series’ Batman donned the first modern Batsuit and dropped the hammer on the first mod Batmobile for the silver screen. 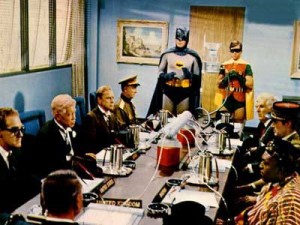 Just like the TV show, Batman, The Movie was filmed in that kookie comic-book style with vivid colors, wild angles and all sorts of mod 60s toys. They pretty much crammed as much stuff into this movie as they could, giving us not one, not two but FOUR villains, The Penguin’s Submarine, The Batmobile, The Batcycle, The Batcopter, The Batboat, and lots of shots of the Batcave. 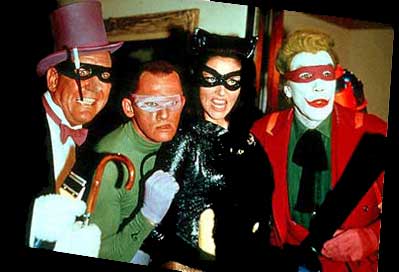 There are so many groovy scenes in this movie I couldn’t possibly mention them all. Just get it and watch it, I guarantee you’ll dig it. It’s silly, it’s funny, it’s action-packed and has great special effects (like the rubber shark). Hell, it’s worth it to ogle Lee Meriwether! 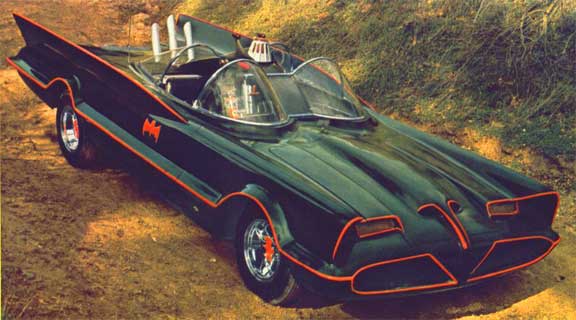 Plus there are lots of shots of the infamous Chuck Barris Batmobile (see Barris’ video on building the original car below).

Dinner & Drinks: Well, believe it or not there actually is a BATMAN COCKTAIL. But since the TV show Batman was something of teetotaler (only the bad guys drank or smoked) it’s just orange juice and grenadine. So what the hell, here’s a little ‘spin’ on the Batman Cocktail (get it? spin, like the Bat logo in the show…nevermind)

In a tall glass filled with ice add rum, grenadine, three drops bitters, and fill with OJ. With long picks arrange the pineapple wedges onto the orange slice so they look like bat ears, and use for garnish. To make a Batmobile Cocktail, float 151 on top and set the whole thing on fire.

For dinner, since you can’t really eat a bat, or a robin, I’d suggest some other winged creature. Perhaps penguin. No, I guess you can’t really do that. Besides, they don’t have wings anyway. How about Pheasant Under Glass, like Bruce Wayne? Forgetaboutit. Just make chicken. Serve it on some really colorful plates and napkins (you can get wild colors at the party store) and don’t skimp on the gravy.

Here’s the video of Barris on how he came to build the Batmobile, from http://www.bat-mania.co.uk: