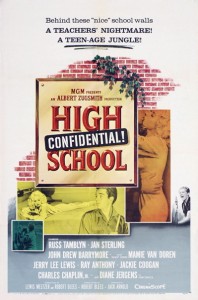 Hipsters, flipsters & all night kicksters, dig in and knock me your lobes. It’s back to school time for you kiddies so here’s a couple of real heavy flicks filled with teen angst and rebellion…a Labor Day Double Play for you ker-azy kats & kittens:

Two groovy movies in glorious black and white that show the dark side of the good old days, the bad crowd that swung to their own tune. Depraved teenagers who engaged in late-night petting and diner food. Hard drugs like Marijuana cigarettes. Rumbles with knives and zip guns. And that most horrible of crimes, not respecting authority.

High School Confidential stars Russ Tamblyn as a kool kat who smokes into town and makes his mark fast, muscling his way into the drug pusher scene. He’s tough and hip and fits right in with the weedhead beats and rebels. He works his way up the underworld ladder to the tip top, daddy…But he’s got a secret, an ace up 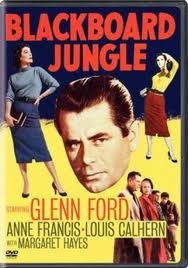 Blackboard Jungle is a rough, tough film that was meant to show the bad-ass side of ’50s youth. It kicks off with Bill Haley’s ‘Rock Around the Clock’, and it was this movie that helped skyrocket Bill Haley & the Comets…and the Rock ’n’ Roll era into space. It’s your typical (and often imitated) story about a hopeful young teacher (named Dadier, who is of course referred to as Daddy-O) who’s thick enough to think he can get through to inner-city rebellious teens and teach them something. Yeah, bring it on, Daddy-O, we ain’t hip to the cheese you’re spreadin’, man.

Here’s the trailer for Blackboard Jungle…

Dinner & Booze: Burgers and fries all the way, man. Shakes too, but add whatever cheap whiskey you can steal out of your old man’s liquor cabinet. If you can sit in your ’32 Ford Hot Rod and watch the flicks on a blow-up screen in your driveway while eating the burgers, then yeah, do that.

My Take: When I was in high school (wayyyy back in the 1980s) I played sax in a buddy’s rock band. They went through a couple of different names (they mainly played as “The Modern Romans” when I gigged with them…hey, it was the ’80s). They finally settled on Blackboard Jungle, named after the movie. Since they played a mix of ’50s Rock ’n’ Roll, Rock-a-Billie and newer rock (along with some standards and original pieces) they thought the name fit well. Of course nobody got it because none of the people who came to see the band ever saw the flick. Anyway, they did a great song called “Coffee at the Diner,” an original they wrote. A real screamer, ’50s style. I’ll try to get an MP3 of it and post it some time.

Talk about a digression. Anyway the point was I was in a band called Blackboard Jungle where I wore a white fedora, black shirt, white skinny tie, Raybans and wrist studs and played tenor sax. It was a blast.

4 Replies to “Dig it, Daddy-O, High School Confidential from 1958 & Blackboard Jungle from 1955 for Mod Movie Monday”