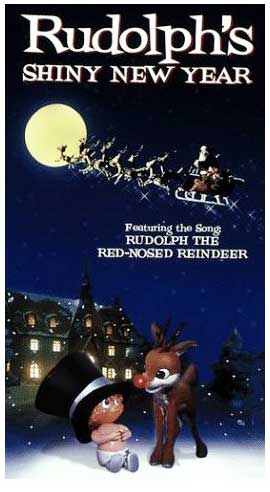 For our last Mod Movie Monday of 2010 I thought I’d throw in a New Year’s flick that everyone loves. One of the last of the great Rankin/Bass stop-motion animated specials from the golden age of animated toys, here is

Father Time jets a message off to Santa…Happy, the baby new year, is missing…and if he’s not found by midnight on New Year’s Eve, it will stay the old year forever! Now, I don’t think there are too many people out there that were keen on living 1976 over and over again. Maybe 1956. Anyway, you see the problem. Snow, fog, etc etc…Rudolph is called into action to find the baby new year. Crazy time-related characters and that great old stop animation make it fun post-Christmas flick.

Whip up a cup of hot cocoa (maybe add some Kaluha to it) for this show. And chow down on your leftover Christmas ham and cookies too.

Oh, and by the way swingers, starting next year we’ll have something new and fun for Mod Movie Monday!

-Tiki Chris reporting from under a pile of Christmas gift wrap next to the Tiki Bar at Tiki Lounge Talk.