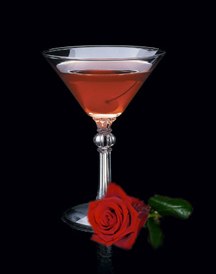 A gin concoction that’s easy to make and fun to drink. I couldn’t find any history on this drink so I’ll make some up.

Back in 1927 there was speakeasy in the basement of the Ritz Hotel in Atlantic City. Since prohibition made it difficult (but not impossible) to acquire good booze, the bartenders often had to make due with what they could get their hands on. An enormous shindig was held on Valentine’s Day that year, but the only liquor they had on hand was some watered-down bourbon and sloe gin…and not the best stuff. So one of the bartenders, a bloke that went by the name of Nickles, came up with this special recipe for the special day:

Separate the egg white and give it a little whip…just a few seconds. Combine the sloe gin, egg white, lemon juice and raspberry juice in a cocktail shaker half-filled with ice cubes. Shake it up well and strain into a Martini glass. Garnish with cherries on a pick and float a red rose petal on top. If the raspberry juice doesn’t give you a nice color, add a few drops of red food dye.The egg whites give the drink a little fuzzy fizz. If you’re scared of getting salmonella, substitute with a little soda instead, but it won’t be as good (or historically accurate, which I always strive to be.)

-Tiki Chris P. reporting from the speakeasy under the Tiki Bar at Tiki Lounge Talk! Stay tuned for more misinformation and cocktails!

3 Replies to “The Lover’s Cocktail: Your Weekend Tiki Bar Drink for Valentine’s Day”