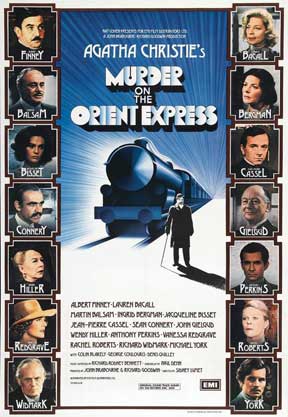 Not all detective stories feature a tough guy in an old fedora, lugging around a .45 caliber piece of iron and bedding every hot dame that crosses his path. One of the best and most entertaining characters in the realm of Who-dunnit mysteries is that of Hercule Poirot, the wax-mustached Belgian detective created by Agatha Christie. Without doubt in the top ten of the most famous detectives ever in print, Poirot is absolutely most known for his role in

Murder on the Orient Express.

Originally written in 1934, this masterpiece of murder was transformed into an all-star movie by director Sidney Lumet and screenplay writer Paul Dehn 40 years later. Dig this lineup: 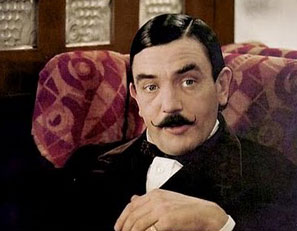 Shot in an old, classic-era Hollywood style, the film is a nice diversion from some of the grittier, dirtier movies of the 1970s. It’s also a nice look back at the way life was at a time when people took trains instead of cars or planes to far-off destinations. The story is intriguing and the acting top notch, as you might expect from such a hip roster of stars.

Finney is great as the somewhat strange Poirot, playing the part much older than his actual age. And of course the ending…the resolve…is one of the most famous in history, with dozens of other books and movies borrowing from it or parodying it. (I won’t give it away here).

Don’t forget this was a book first…watch the movie, then read the book.

Food & Booze: I would suggest an aperitif, perhaps a Champagne Cocktail or Negroni to go with this upper-crust flick. Roast chicken, Brussels sprouts and Waldorf Salad should make an entertaining dinner. Then again, a pizza and beer works just as well.

Here’s the original trailer from 1974:

Tiki Chris reporting from the terminal at the Orient Express

2 Replies to “Murder on the Orient Express, 1974 for Mod Movie Monday”