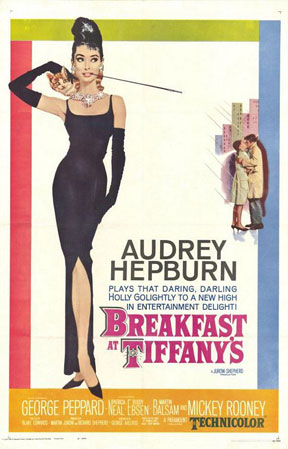 Let’s face it kats and kittens, there are few flicks more romantic or more charming than

Swing back to New York City in 1961, and immerse yourself in the lifestyle of the time, where a pretty girl from the country can take some eloquence lessons and charm her way into society. Hepburn, as Holly Golightly, creates an imaginative, magical character that’ll have you wishing you had a friend (or lover) just like her.

The settings (filmed on location) and scenes will really give you the feeling you’re back in the MAD MEN era of the early 1960s. There’s a crazy party scene…possibly one of the longest in film history, second only to “The Party”…complete with plenty of cocktails, wolf-like bachelors, and agreeable women. There’s even a raid!

But the movie is more than just silly fun. The movie is based on a book originally written by Truman Capote, and follows the book fairly closely (as much as the producers could get away with. See notes at IMDB). Holly’s character is multi-dimensional, swinging from a sophisticated socialite to…well, just watch the flick. Notable nuances include The Cat, named simply “Cat”, that lives with Holly but doesn’t belong to her; George Peppard’s character Paul, a down-on-his-luck writer who has become a “kept man”, and Buddy Ebsen as Doc Golightly…who I won’t spoil by giving away any more info.

Why you should watch this movie: First of all, it’s just a great movie directed by the incomparable Blake Edwards, winning the Oscar for best original song (Moon River, Manicini/Mercer) and best music score, plus nominations for best actress, art direction and screenplay.

Second, it’s a phenomenal time capsule into the look and lives of early ’60s New York, with plenty of shots of streets, businesses and cars, and to me, that makes an old movie even better. Third, you won’t find a more interesting, fun and well-played character than Holly Golightly, and Hepburn pulled it off so well that 50 years later people are still praising her performance.

My take: I saw this movie for the first time when I was a kid, so I of course didn’t get most of the innuendo (There’s a hell of a lot of sex going on in this movie for a flick that came out in 1961). I saw it again in my 20s and loved it. Then I convinced my wife, Colleen, to watch it…she’s very picky when it comes to watching movies, old or new, and didn’t think she’d dig it…and it became one of her all time favorites. I tell you, there’s magic in that film.

Food & Booze: Ok, this is a no-brainer. Breakfast foods, of course. For drinks, they seem to drink a lot of straight liquor in this flick, but if you’re going with the breakfast them you should probably stick to Screwdrivers or Mimosas.

Below is the original trailer. Notice how the announcer mispronounces “Capote”.