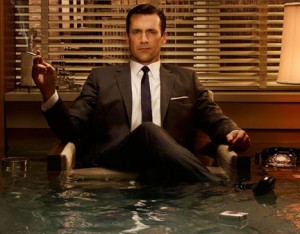 For those of us who dig the mid-century theme and have been watching MAD MEN since it began in 2007, we knew the day would come when the show would leave the golden era of cocktails and pocket squares and move into the turmoil of acid rock and civil rights. Well, Season Five has begun in 1966, and without a doubt, the show is there.

Some critics will talk about how even in two hours there wasn’t much drama; they’ll complain that the show moved at a slow pace, trying to make up for the last year-and-a-half on the shelf, doing little more than reintroducing characters and playing “catch up”. Those who love the show will attribute the slow pace as a device to build tension, culminating in two major events at the end: Don Draper is once again seen taking what he wants, when he wants; and the very powerful and thought-provoking scene where, for the first time ever, black applicants are allowed…in fact, invited…to apply for a position on Madison Avenue.

Several important points are made during this episode. Some are obvious and stated right out, like Pete’s assertion that he’s bringing in the most valuable clients (and therefore is a more valuable asset than Roger Stirling). We’re also reminded that Joan’s husband is in Vietnam while her baby is Roger’s, both Pete and Roger aren’t exactly happy with their home lives, SCDP is still struggling financially although “stable”, and although Burt Cooper still has a presence, it’s really Don who is running the show.

But there are several unsaid, more subtle changes that can be seen throughout the show. For instance, when did Harry become a complete jerk? Seems he lost a little weight, and became completely unprofessional and downright obnoxious. We’re talking about a character who broke down in tears during a client meeting after cheating on his wife, now crassly displaying what he would do with Don’s wife given the chance. I don’t see it…seems those lines should have gone to the cad in the creative department.

We see Pete, a little older, a little heavier, and a lot more in control. He’s gone from being whiny to being demanding…and although he doesn’t get exactly what he feels he’s entitled to, his assertion does get him ahead. It will be interesting to see where his character goes this year, as I have a feeling he will be moving up…and possibly over Roger Stirling. But not without a fight, of course, as it looks like Roger is eager to regain his status as top grossing account man…and he’ll do anything to achieve it, including swooping in ahead of Campbell at his own client meetings. But does Stirling still have what it takes to bring in the big accounts? Time, as they say, will tell…

Take a good look at the photo above. The people who market MAD MEN don’t do anything by chance. This photo was very carefully merchandised. Notice the Life magazine. More importantly, look at the faces, postures and placements of the characters. This is probably the first time we’ve seen Don Draper shown in a lower position than the others, even though he is still the focal point of the image. Note the stern look on Peggy’s face, Don’s relaxed posture, and Roger’s benign, almost confused gaze. Roger is even sitting in a red chair, the only red image in the photo – could it suggest he is in the hot seat? Look at how close Joan is to Roger with a sexy pose, while Peggy is very close to Don but in a very professional arrangement. Coop is basically alone but looking very serious about his position, while Price is furthest back, but centered and looking very much in control. Also note who is dead center in the photo, and the only one looking ‘up’…Pete Campbell, who I feel is going to become a much bigger deal at SCDP.

We see Don is still affluent enough to afford a brand new 1965 or ’66 Cadillac Coupe DeVille* (with power windows, back when that was an option), as he drops off three seemingly happy kids. He refers to Betty and Henry as “Morticia and Lurch”, a reference to The Addams Family that is probably lost on many younger viewers. No matter; Betty’s name or image doesn’t come up anywhere in the episode, making her nearly a non-entity, until Don’s new wife Megan asks if Betty every threw him a birthday party. His response is that he forbid it. The “up yours” look on Megan’s face is enough to show us that this is the scene where the old Don, the Don who could snap his fingers and get what he wanted, was gone, and as he turns 40 he will have to fight to take what he wants or thinks he deserves.

*A side note: Remember the days when kids sat up in the front seat, without a car seat or seat belt? 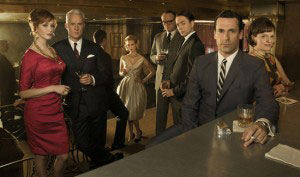 Another thing: Anyone notice how much prettier and incredibly more likable Megan is this season? Not that she wasn’t attractive before, but suddenly she is sexier…much sexier…going beyond the “easy, gold-digging secretary” bit to a whole new level of sophistication and charm. (Plus there’s less going on with the whole teeth situation.) Finally, we know why Don asked her to marry him…she’s not just young, good with the kids and good in the bedroom, she’s a challenge, a complete departure from the submissive (to the point of being annoying) Betty. Maybe that’s something Don really needs in his life, without admitting it. Or maybe he just doesn’t know what he’s gotten himself into yet. Whatever the case, I didn’t care for Megan’s character last season. Maybe that was intentional on the part of the producers. But this season she’s on fire, and I hope she keeps going in that direction.

Joan shows us some very uncharacteristic weakness, both in dealing with her mother and confronted with the possibility of being shut out of SCDP. She blames her tears on the pregnancy…but we all know she’s going through a heap of problems that really have no way of coming out on the sunny side. If her husband survives Vietnam, he will surely figure out the baby isn’t his. If he dies, she’s stuck alone again with a baby to care for, with only Roger to turn to…who, as we know, can turn hot or cold on a dime. Bad scene, baby.

We all dig MAD MEN and have from the very first episode when the mysterious Don Draper sat in a lounge, drinking an Old Fashioned and writing ideas down on a cocktail napkin. “Smoke Gets In Your Eyes” swung as back to 1960, a peak year during the golden age of Martinis and sharkskin suits. The only downfall to season five is that it’s started in 1966, which is pretty much the beginning of the end of the era we love so much and tuned in for, for the past five years. The styles change, the music changes, the world changes, some for the better, some not. It is these changes (and the changes in the characters as well) that will keep the show fresh and interesting, but we will miss the Madison Avenue of 1960.