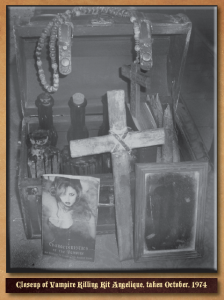 If you dig cool stuff from the past, then you probably dig Dracula movies, BW vampire flicks and other assorted old Horror stuff. Something that has always been a favorite vintage “oddity” of mine has been the turn of the century Vampire Killing Kit.

I first saw one in the Ripley’s Believe it or Not Museum in St. Augustine, FL about 30 years ago. I thought it was crazy fantabulous, and always wanted one for myself.

What is a Vampire Killing Kit?

A box or satchel filled with the tools necessary to kill a vampire. They were originally made (according to Ripley’s) in the late 19th Century, for American tourists traveling to Transylvania (after the book “DRACULA” became an international hit). They usually contained a pistol, vials of holy water and garlic oil, a crucifix, and of course a wooden stake. Some were a little more elaborate with dental tools for removing the vampire’s fangs, a dagger, and something called “secret serum” which was supposed to heal vampire bites.

This new site showcases the new, vintage-style Vampire Killing Kits created by CRYSTOBAL, self-proclaimed vampire hunter and Gothic artist. CRYSTOBAL and I go back a long way…in fact, I have a few of his kits that he’s made over the years as part of my collection of pop culture junk!

CRYSTOBAL has been making these kits for years, and has created his own style – “modern primitive” – for his kits. Unfortunately, unscrupulous individuals have attempted to copy his style and take credit for resurrecting the vampire killing kit craze. But dig, he is the real deal. 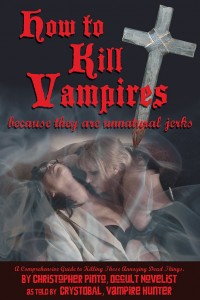 -Tiki Chris P. reporting from the Halloween shop down the street from Tiki Lounge Talk