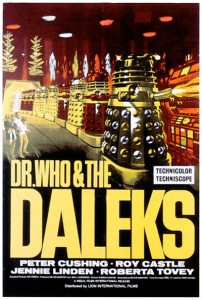 Been a while since I did a “Mod Movie Monday” post, mainly because I’ve been busy with doing some much-need restoration on my 1953 Chevy Bel Air Custom, writing a new paranormal murder mystery, and launching a new idea…more on that later.

So here we go, kats and kittens, back to our regularly schedule program. This week we feature

Doctor Who and the Daleks

from 1965, starring Peter Cushing as The Doctor.

This movie was produced “outside” the original series universe, and as such, die-hard Who fans may find it a little annoying that it doesn’t follow the established theme. But the Doctor is still somewhat of a mad scientist, he still has traveling companions (in this, his two grand daughters and one of their boyfriends), the TARDIS is still a blue police box and bigger on the inside, and they still travel through space and time with special effects that remind you of Lost in Space. And it’s the mid-1960s, so there’s a kind of cold war-era peaceful-people-fighting-against-fascist-overlords kind of vibe.

Food & Booze: You’ll want something far-out, futuristic and still 1960s to go with this. I’d suggest Saturn Sliders (little burgers with big onion rings around them) and for drinks, Blue Neptune Cocktails in a tall, clear glass (see recipe below).

My Take: If you like Doctor Who, or just dig kookie movies from the mod era, you’ll dig it. From the TARDIS interior (which looks more like a black box theater than a space ship) to the annoying Daleks, it’s a fun treat that will whisk you back to the past before accelerating you to the future.

Mix all ingredients except lemon and orange in a shaker with ice. Strain over a tall clear glass half full of ice and garnish with the twisty lemon peel and orange wheel. You can secure the peel to the wheel with a sword or pick, and add a cherry if you are so inclined.

Oh, I almost forgot…that new idea I’m working on: Yours truly is embarking on a little side biz. Starting now, I’ll be offering my cool & kookie services as a vintage-theme party DJ in the South Florida are. That’s right…I’m putting the thousands of songs I’ve collected over the years to good use. So if you know anyone who wants to have a retro theme party, I’m you man…as long as it’s somewhere between West Palm Beach and Miami, Florida. Check out the new website for the low down. By the way…in that world, I’m known as “Riff”.

One Reply to “Doctor Who and the Daleks, 1965 for Mod Movie Monday”