The great thing about living on the East Coast of South Florida is that no matter where you live, you’re never more than about 15 miles from the Beach.
The bad thing is, between the traffic and unpredictable weather, unless you live on the beach, you hardly ever go.
So this weekend Colleen and I are taking a little “stay-cation” at the old-skool beach hotel, the Tropic Cay, located in the heart of Fort Lauderdale beach on historic A-1-A. 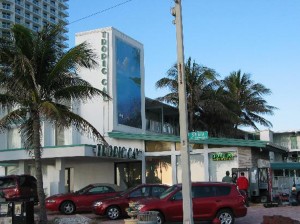 I’ve not yet been able to find a lot of history on the hotel, but it’s obvious by its construction and architecture that it’s from at least the ’60s, and possibly (probably) from as far back as the ’30s. The look is definitely old-Florida Art Deco-ish Mid-Century Modernish, for lack of a better description. The “ish”es come from at least 50 years of changes and remodeling. Remember, that style was strictly out in ’80s and ’90s, and even though Retro is chic and hip now, the owners don’t seem to want to exploit the charm of its roots. No matter, it’s literally across the street from the beach, has a mini fridge in the room, and a Tiki Bar on the patio. I’m hip. 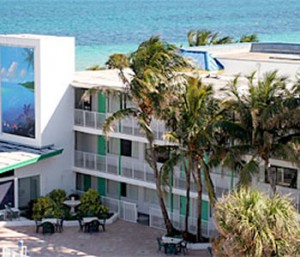 I’ll be sure to take plenty of pix of the Tropic Cay. Word is the old Spring Breaker hangout is in its final days…as the owners plan to plow it down to make room for a new, upscale hotel with $400 a night rooms.
Yes, just what we need…more upscale hotels that no one can afford to go to. Anyone check the vacancy rates lately?