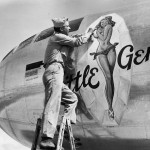 The Management at the Tiki Bar (which consists of two cats, four birds, a screwy dog, another dog on loan, a hot blonde bombshell and yours truly) would like to take this opportunity to thank all the GI’s, Airmen, Sailor Boys (and Girls) and Marines for keeping our land, seas and skies safe from the axis of evil and forces that are hell-bent on tearing down America’s freedom and everything we stand for. Without you, we’d all be speaking German right now. Or Russian. Or some other strange gobbledee-gook. Anyway, thanks, and keep up the great work. 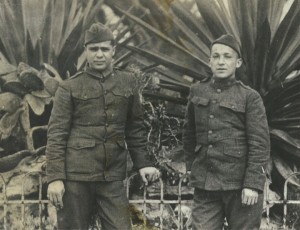 (I’m doing this from memory of stories I heard 30 years ago, so my details may be a little sketchy) My Grandfather, Charles Pinto Sr. was born in Italy in 1898. He came to America as a young boy, and a few years later found his new beloved country entangled in a war with, among others, his homeland. It was difficult, because he had sworn his allegiance and citizenship to the USA, so when his number came up, he went to War in Europe, April 1918.

When he got to the recruitment office, they asked him straight out if he was willing to fight for America against not only Germans, but Italians (who were allied with Germany). His answer was he was an American. They gave him the choice of sending him back to Italy and denounce his American citizenship. He said no, he would willingly fight for the country that gave him and his family freedom and opportunity. And so in April, 1918, he was shipped over to Europe as a GI in the 52nd Pioneer Infantry. He spent the next several months in a trench trying to stay alive. Without doubt, he was one of the luckiest soldiers in WWI, as the war ended in September, 1918, and he was back home in Philadelphia in the land of freedom a few months later. But he almost didn’t make it…

Gas. Chemical warfare at its earliest stages. Atomized sulfuric acid, chlorine gas, all kinds of nasty stuff. The Germans were at the end of their rope and were throwing everything they had at the dough-boys. My Grandfather got caught in a cloud of Mustard Gas that left him alive, but deaf in one ear and with only 1-1/3 lung capacity for the rest of his life. But that’s not all kids; he had one of the best stories (although apparently a pretty common one) to come out of WWI…

Trench warfare was probably the dumbest, most inefficient and silliest form of two sides killing each other ever dreamed up. Basically, you dug a long trench, and a couple of hundred yards away the other guys dug a long trench, and for four or five years you just kept killing each other back and forth, without really going anywhere. The first one to run out of warm bodies lost. In between, commanders would attempt ‘raids’ on the enemy…a bunch of poor soldiers running across what was known as ‘no man’s land’, through barbed wire, dead bodies, mud, gas, mortar and machine-gun fire. Whoever lived through it jumped into the other guy’s trench. Their weapon was a bolt-action rifle that was basically good for one shot… then it was all hand-to-hand fighting with bayonets. This always ended badly.

Occasionally there were night raids. These were the worst of all because you couldn’t see a damned thing; there were no lights allowed, so you never knew who you were fighting. They even invented a special ‘trench style’ cigarette lighter, so the enemy couldn’t see the flame. It was during one of these night raids that the young Pasquale (named ‘Charlie’ at Ellis Island so he would sound more American) who barely spoke English found himself alone in a stretch of trench on the front lines of France. Bombs were exploding, he was out of ammo, and was basically just waiting it out in the dark when he heard footsteps running toward the trench. A second later there was someone with him in the trench, not knowing he was there. He readied his bayonet, and called out to the guy. The response came in English, “Hey Joe, got a cigarette?” Relieved, he lit up a couple of sticks and quietly talked with the soldier for a few hours, until the bombs stopped and they were able to get some shut-eye. At dawn, the blood-red sun cast long, eerie blue shadows over the trench. When my Grandfather awoke, the soldier was gone. In his place was a German infantry pin. He had spent the night talking not with another dough boy, but with a German, a guy who was supposed to be the evil enemy. But it wasn’t like that at all. That German could have easily killed my Grandfather. But he didn’t because that night it was just two scared kids speaking broken English, trying to get through hell in one piece.

12 Replies to “In Observance of Veterans Day, A Thank You & A Story”