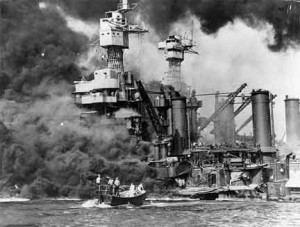 “December 7, 1941, a day that will live in infamy…” When President Roosevelt spoke these words, I believe he knew that indeed, this day would be remembered as long as America lives on. This marked the first time (and still the last) since the War of 1812 that foreign shots were fired on American soil. Not until the sneak attacks on 9/11 would America have experienced such loss of life on our own land.

“Tora! Tora! Tora!”, Japanese for “Tiger! Tiger! Tiger!” was the code call that started the attack on the Naval Base in Pearl Harbor, Hawaii. Although warned that there might be an attack somewhere in the Pacific and some time soon, our boys were caught with their guard down, and suffered heavy losses. This is the attack that brought America into WWII. This is the attack that changed history, and led to the world we live in today.

Well, they succeeded. If not for the these men and women, you wouldn’t be reading this now. You wouldn’t have a home computer, or an iPod, or a digital camera. You wouldn’t have had 8-Track tapes and Huffy bikes as a kid, or Jazz music today. It’s because of the advances in technology and the freedom to create that you have these to enjoy.

I had an uncle who was eating breakfast in Pearl Harbor when it was attacked. He lived into his 90’s, but for his entire life he jumped every time he heard a car backfire, and shook when an airplane would fly overhead. An entire generation of Americans and Japanese (as well as most of the world) experienced bloodshed and horrors that we today can’t even imagine. But as the years go by, the wounds heal. We’ve been friends with Japan for a long time. We dig their technology, they dig our culture. If we can win over an enemy like the Japanese were back then, there’s a lot of hope we can win over our enemies today, are you hip?

2 Replies to “In observance of Pearl Harbor Day”