Today from the Tiki Bar, here’s a kookie flic that’s got so much insanity flying around you’ll have to watch it three times just to figure out what the hell is going on. Straight from swingin’ London during the heart of the Mod era comes

This is a kinda-sorta real but not really part of the James Bond 007 series of movies…it was supposed to be the movie version of Ian Flemmings’ first James Bond novel, but Hollywood politics got in the way. Long story short, producer Charles K. Feldman decided to make it a spoof of the James Bond movies. Cut to Peter Sellers. Hilarity ensues.

This is the only James Bond film to offer multiple Bonds…David Niven stars as the retired James Bond, a somewhat stodgy fellow who is rather annoyed by the sexual antics of the new 007s. Peter Sellers stars as Evelyn Tremble, who becomes James Bond. Woody Allen plays Jimmy Bond. The list goes on…

This spoof takes elements of the original story and twists them into an LSD-induced string of craziness that is fun to watch. The fact that Ursela Andress, Jaqueline Bisset and Deborah Kerr are in it don’t hurt. Throw in kats like William Holden, Orson Welles and George Raft, and you can’t miss.

This truly “Mod” movie even includes original music by Burt Bacharach, much of it performed by Herb Alpert and the Tijuana Brass. “The Look of Love” is performed by Dusty Springfield behind one of my favorite 60’s Movie Scenes of all time, which includes glowing goldfish and a sunken living room.

I won’t try to give you a synopsis of the story…that would just make things more complicated. Just watch the silly film. It may be a little hard to take if you’re not into the scene. It’s strange, it’s odd, it’s a product of the times. It had six-plus separate directors. Sellers and Welles couldn’t stand each other and the scenes they were in together were shot separately using stand-ins.

Sellers was so much trouble on the set he was fired before filming was over, and they re-arranged the ending of the movie around scenes he never shot. (There’s a lot of great trivia on the movie at IMDB, click here). It ran over budget and was one of the most expensive films produced up until that time. All in all, it managed to make it to the number 3 spot for 1967. 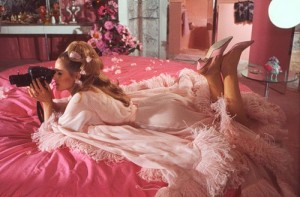 I don’t dig drugs, but if I did, I’d want to be high on acid to watch this. Since that ain’t gonna happen, I’d suggest something a little far out there…for snacks, stuffed mushroom caps, escargot, assorted cheeses with pimentos and olives, you know, goofy 60’s stuff. For the booze, I think Martinis would be ok, but expand your mind for this groovy movie, try a Gin or Vodka Collins, a Harvey Wallbanger or maybe a nice Golden Cadillac.