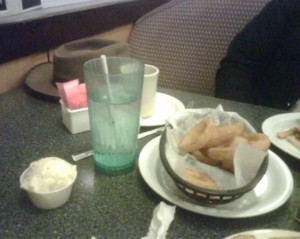 Man, it’s been way too long since I parked it in a diner booth. All day long I had a brain pain for a Bamburger and grease rings. So when I hit the door, I grabbed the ole Lady and we swung the Caddy down to Lester’s Diner on 136th Avenue.

Not the least bit disappointed in my grub. A big old Cheeseburger with bacon and fries, rings, slaw and a cup’a Joe. A shake would have topped it off, but it would have broke the bank so I quit early.

Joints like this used to be my hang out, back in the days before I had my own little Tiki Bar, back before the Mai Kai was a short drive away. Diners, all kinds of diners when I swung back in Jersey. Jersey is, after all, the diner capital of the world. You couldn’t swing a bat without hitting a neon sign that said “open 24 hours”. Not so much down here in the land of Mai Tais and Palm trees. There’s one diner in 8 miles, and it shuts down at midnight. Thank God the Tiki bars are open late… 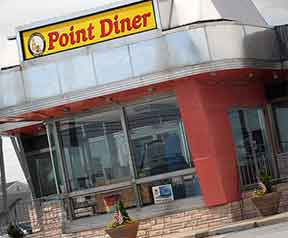 There were a few haunts I made my mark at. The Point Diner in Somers Point, NJ is where I spent many a night and many a paycheck. Coffee and a burger at 2 am? Why the hell not? All my gang hung out there too…in fact, I remember one particularly kool New Year’s Eve that we wound up there around 3 am…and who was there, but this really hot swingin’ chick that I went around with in high school. It was a very groovy meeting, that night. Never forget it.

Then there was the Blue Diamond Diner in Pomona, NJ. This was a 1950’s rail-car style stainless steel masterpiece, with the original guts still intact. They had the old 70’s style jukeboxes filled with stuff from Sinatra and Elvis. And one of my favorite songs to play at a diner, just before leaving, Sleepwalk by Santo and Johnny. Yeah, those were the days. 50¢ cup of strong Greek coffee and I was good for hours.

Back when I had my Dinner Theater Company, Stardust Productions, after every show I’d take the cast to a diner and buy them all dinner. We’d wind down and talk about the show, how much fun it was, how to make it better. It was around then I picked up the nickname Mack, after a gangster character I played in a show.

I miss those old diners. I miss the smell of grilled onions in the middle of the night, the taste of good diner coffee and breakfast at 4 am. I miss the feel of those old places, the scratchy records in the jukebox, the neon lights. The diner we hit tonight was good but not quite right. There’s something unhip about a diner that has a 34″ plasma TV mounted on the wall, that plays nothing but commercials. There’s something un-groovy about a CD jukebox that’s filled with riffs by Jenny Lopez and Matchbox-20, but doesn’t have a single Elvis tune. Sure, the burger was good, the java was good, and the company was great…even motoring there in the old Cadillac was fun. But these new joints just don’t have the same feel, the same atmosphere, as those old stainless steel diners held together with apron strings and grease that I grew up with.

7 Replies to “Coffee at the Diner: Living the Retro Life”