{RIP Peter Graves. Whenever I see the inside of a Turkish Prison, I’ll think of you} 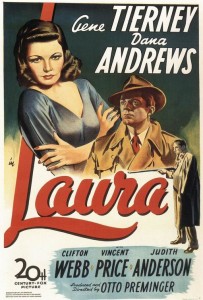 We’ll break from the colorful Mod movies this week to bring you one of my all-time favorite classics of the Silver Screen,

This is a hell of a movie.

As usually, I won’t give anything away that’s not in the original trailer. This is the story of a hard-boiled, hard-drinkin’ detective who investigates the gruesome murder of young woman, Laura. He is immediately enthralled by a painting of the beautiful Laura, and as he investigates and learns more about her life, he realizes how incredibly perfect she is in every way…and basically falls in love with her painting. Putting his feelings aside, he delves deeper into her life to uncover her murderer and the truth- and finds an intricate web of deceit, misfortune and jealousy that leads him to a completely surprising outcome.

Filmed artistically in black and white, this flick won the Oscar for best cinematography, and is one of the most notorious Noir movies ever made…with one of the most recognizable theme songs ever set to a motion picture. It combines all the elements of a great detective movie – the flawed hero, the beautiful victim, high society meets lowbrow detective, old cars, guns and violin music. Clifton Webb’s performance (his first on screen since the silent era) earned him a best supporting actor nomination. A performance by a young Vincent Price will take you by surprise too, along with a sneak peak into the some of the fashions, technology and lifestyles of the era. Remember kids, back in 1944 the world was without TV and a lot of other things we’ve taken for granted over the years.

Scotch plays an important part in this movie. A bottle of “cheap” Scotch, labeled “Black Pony” is a pivital clue. (I’m pretty sure “Black Pony” is supposed to be “White Horse”, a cheaper brand of blended whiskey at the time.) In the most important scene of the movie, Detective Mark McPherson sits in Laura’s apartment in front of her portrait, drinking (what is obviously, by the shape of the bottle) Dimple Pinch, so that’s my suggestion for this movie’s drink – Dimple Pinch, straight up. Since the characters are mostly of the sophisticated New York type, why not dine on Beef Wellington and roasted potatoes, or something just as elegant, served on your finest vintage china and lit by slender tapirs in cut-glass candlesticks? The candlelight will be perfect for watching this black and white classic.