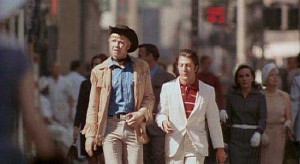 Note from the Tiki Bar: NO SPOILERS HERE. Read on, but be careful if you’ve never seen Midnight Cowboy and search the web for info…since the movie is over 40 years old, there are spoilers everywhere. And believe me, you want to see the movie cold.

The Movie: This movie is gritty, rough, funny, poignent and fantastic. And because it’s filmed on-location, it’s got lots of great shots of the way things looked and the way people lived back in the late 1960s. From Joe Buck’s solid-state radio that he loves so much to the Cadillacs and old Checker cabs on the streets of New York, it’s like a time capsule waiting to be discovered.

Midnight Cowboy was adapted from a 1965 book by James Leo Herlihy. The director, John Schlesinger wanted to bring the story to the silver screen with Dustin Hoffman in the role of Ratso Rizzo, a small-time conman living on the streets. Actors like Warren Beatty were considered for the role of Joe Buck, the Texas ‘cowboy’ who moves to New York City to make it rich as a hustler…a male prostitute to rich women. Schlesinger finally chose Jon Voight, a relatively unknown actor for Joe Buck, feeling that by doing so the character would be more believable. A magic combination was born.

There’s no way I can lay down  how powerful this movie is here, especially if you’ve ever been broke with dreams of living in paradise. There are several themes going on in this flick. One is of Joe Buck trying to be something better than a dishwasher, and relying on his looks to get rich. Another is of Ratso Rizzo, looking for someone who will help him get off the streets and down to Miami, where he believes he can live out the rest of his days in luxury (and even overcome his handicap). And of course there’s the bond that forms between the two, so strong that it’s sometimes mistakenly interpreted as a homosexual relationship (spoiler: it’s not a homosexual relationship). 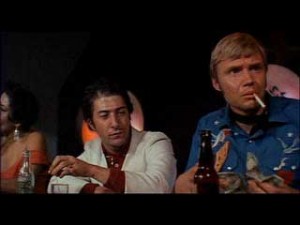 The Cinematography: This movie wasn’t shot, it was crafted. From the camera angles to the background music to the imagery of the cold winter juxtaposed with the bright Miami Beach scene, every frame in this movie has something to say. Plus it’s got one of the craziest, best mod-psychadelic sequences in any movie to come out of the era…the party scene, a la Village 1968, which actually includes cameos by ‘Warhol Superstars’ Viva and Ultra Violet. Drugs, strange imagery, weird music, far-out people and lunch meats make this one of the best scenes in a flick full of great scenes.

The Icons: Even if you’ve never caught this movie chances are you’ve seen or heard something that references it. The line “I’m Walkin’ Here!” was first shouted by Ratso Rizzo in this film. The iconic image of the cowboy, out of place and down on his luck has been copied time and again. Hell, he even gets ketchup on his new blue jeans. References to scenes and characters have been made in numerous movies and TV shows including Forrest Gump, Back to the Future II, Futurama, Seinfeld, The Simpsons, and Rizzo the Rat from The Muppet Show. 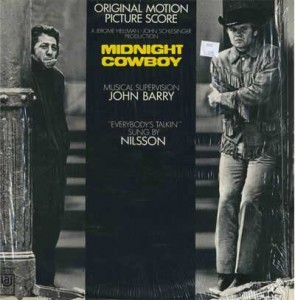 The Music: “Everybody’s Talkin’ At Me” is the song most associated with this movie, with the haunting Midnight Cowboy Theme running a close second. Originally “Everybody’s Talkin'” wasn’t supposed to be in the movie. Harry Nilson had written the song “I Guess the Lord Must Be in New York City” for the movie, and “Everybody’s Talkin'” was used as a stand-in song during editing. It stuck. It’s hard to imagine what this movie would be like without it. The sorrowful end theme was written by John Barry and again, has become iconic. (Note: Bob Dylan’s “Lay Lady Lay” was considered for use in the film. Just wouldn’t have been the same.)

Why this post is so damned long: Cheers to you if you’ve made it this far. Ok, I know I usually promise to keep things short. I got a little carried away with this one because out of all the Mod Movie Mondays, this is probably the most serious, well made and definitely one of the best. It’s got three Oscars to prove it, too…Best Director, Best Writing, and Best Picture…plus 23 other wins and 12 nominations including Best Actor and Best Supporting Actress. But it’s more than that to me.

I first saw this movie when I was around ten or so. It was edited for TV, and since they edited down the sex scenes to only the slightest suggestions, most of it seemed like more of dark comedy than a drama. My parents loved this movie (on a different level) and for the remainder of their lives would quote things like “Gimme some soup” and “Dumb cowboy”.

When I was a little older I got to see the uncut version, (which confused the hell out of me). What I picked up from it the second time around was the desperateness of the characters to get out of cold, mean city and down to Florida, where everything was bright and sunny and beautiful.  That stuck with me for years, and when I saw the movie again in my twenties, I understood all of it…and the idea of the Sunshine State being the escape from drudgery became a sleeping giant in the back of my mind.  Hell, even the theme song unintentionally refers to Florida: “I’m goin’ where the sun keeps shining through the pouring rain, goin’ where the weather suits my clothes”. If anyone ever felt the desperation Enrico did, it was yours truly, kats. 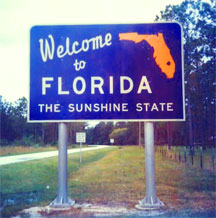 In 2000 I finally “hopped on the bus” and moved to Fort Lauderdale, Florida to start a new life with my wife Colleen. “Everybody’s Talkin’ at Me” went through my head as we crossed the border from Georgia into Florida, and the sun actually was shining through the pouring rain. And believe me, the weather suits my clothes.

Dinner & drinks: Wait ’til the end of the movie. You’ll thank heavens for anything you’ve got in the kitchen.

-Tiki Chris, AKA ChrisPFlorida reporting from where the sun keeps shining through the pouring rain…