If you watch this movie and think, “Hey, this looks like it was filmed in a mall!” you’d be right.

Swing back to 1975, when America was proud of its upcoming Bicentennial celebration and sci-fi films were still using stop animation and model rockets on strings. 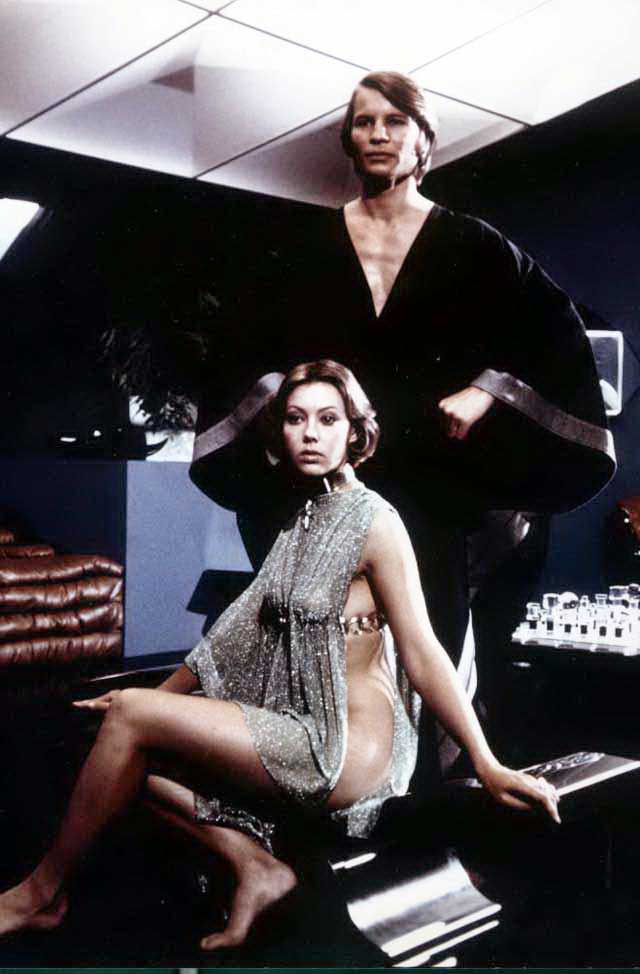 Somewhere in Texas a film crew was shooting a movie with a $9 million buck budget and a lot of hope. What they ended up with is a somewhat cheesy looking but still fantastic movie.

This was ’70s sci-fi at its best (before Star Wars came along and set the new standard). A futuristic, post-apocalyptic world where people had ’70s hair and polyester clothes, and the buildings’ interiors looked like the mall you went to when you were a kid. All they needed was an Orange Julius and a Copper Rivet to make it complete. You probably already know the plot – in this futuristic society, people are cared for by machines which supply food, clean air and water. The family unit is non-existent; sex is for pleasure and babies are mysteriously incubated by machines. To keep the (un)natural balance, everyone has a “life clock”, basically a plastic gem from Woolworth’s embedded in their hand which tells them when it’s time to die (age 30). But everyone gets down with this plan, because they don’t believe they are dying, they believe they are being renewed. Groovy.

Here’s the catch: Some kats don’t buy this “renew” jazz that’s laid on them, and believe there’s a much better place to live called “Sanctuary”. Yes, that’s right, they believe there’s a much better place than the place where you pretty much don’t have to work, don’t have to worry about finding food, or getting sick, where you can have all the sex you want without consequences and where you never have to worry about getting old…yeah, I guess some people might not dig that life.

So these kats are always trying to skip town, get away through some crazy underground system of tunnels that looks like a sewerage plant, to the outside world. They keep trying, and the police (known as Sandmen) try to stop them. This happens a lot.

Now, I won’t give away the whole story, but I’ll tell you this much: The adventure begins when the computer that runs society has a great idea to turn a Sandman into a runner by advancing his alarm clock several years to 30. Now he will die if he doesn’t infiltrate the runners’ gang and find this “Sanctuary”. Hence the name, Logan’s Run.

Why bother watching this flick: It’s pure fun, ’70s style, and it actually was filmed in a mall (see pix below) From the obvious toy model of the city to the toga-like clothes to the 35 year-old-style holograms, this movie is full of the stuff we loved back in the day. They even have laser guns. The imagery is very kool in many parts of the movie, and even with the low-budget effects it’s still a good flick with an original story. One thing really neat about using malls and other existing yet future-looking sites to film at is the illusion that this world isn’t really much different from ours, and that this future isn’t too far off from our own.

My story: I first saw this movie in 1976 on a brand new TV channel called “Prism” (Philadelphia Regional In-Home Sports and Movies). Prism came in on a big black plastic box with a clunky knob that you turned from “TV” to “PREMIUM”. Prism was off the air most of the day, and usually came on around 8pm. It mostly broadcast Phillies games with a couple of movies in between. For what seemed like months, the only movies it showed were That’s Entertainment! parts one and two, and Logan’s Run. I think we watched each of these movies a thousand times. No wonder I like sci-fi and old musicals. For years I used to kid with friends that the world of the future looked like the Searstown Mall in Pleasantville, NJ. Then 25 years later I looked it up on the internet, and lo and behold, the thing was filmed in a mall.

Well, that’s that on this oldie but goodie. I can’t give it five stars for great acting or special effects, but as a testament to its grooviness, there hasn’t been a remake of it in 35 years…at least not yet.