Ok kids, I don’t often blow my own horn but I gotta tell ya, if you want a spooky, creepy, eerie, sometimes scary and very kool book to read this Halloween season, my book “Murder Behind the Closet Door” has it all. It’s an old-time murder mystery detective novel wrapped up in a paranormal mystery. A ghost story with a twist. Kind of Micky Spillane meets Stephen King. It’s written in that old, 50’s-70’s style that we retro kats love. In fact, the story takes place in Wildwood, NJ on the Jersey Shore in 1978-79 with flashbacks to 1938 and 1957.

For a full run down on the book and a few pages to read visit the site at Amazon.com Here, or the official website at StarDust Mysteries Here. 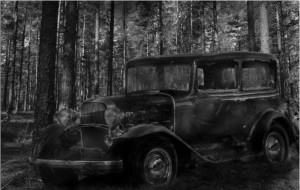 If you dig my writing style here at the Tiki Lounge, you’ll dig this tome. It’s already got eight great reviews on Amazon, and everyone who reads it has been hip to it in the utmost. Here’s a little snippet of the story:

Riggins’ heart tried to jump out of his chest but his ribs got in the way.
He stumbled and backed up to a large tombstone. The phantoms where all around him now, swirling, screaming. The sky was as dark as twilight and the temperature seemed to drop to 40 below.
Swirling, screaming, moaning, closing in.
Heart Pounding.
Vision hazy, breathing difficult.
The wraiths moved in for their attack.
Like a sudden flash from a fired gun the spirits pummeled Riggins from the front and back. He could feel their freezing forms fly through him, icing up his guts. He mustered every last ounce of strength just to stand there, but he wouldn’t give in, wouldn’t fall to the wrath of the phantoms. Ice bit at his face and hands. Reilly’s faceless mass tore through his chest, stopping his heart for a second. One more like that, he thought, and he’d be a gonner.

I don’t want to give too much away so that’s all you get for now. Trust me, if you like ghosts, the paranormal, the occult, and gumshoe detective stories you’ll love this book.