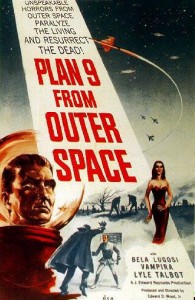 It’s Halloweekend at the Tiki Bar! From one of the worst directors to one of the best, on this week’s Mod Movie Monday we’ll look at two kats who changed the way we look at movies forever.

Let’s start with our favorite bad director, Ed Wood, Jr. Ed brought us some of the most poorly written, directed and produced films of all kind, with the zenith (or basement) of his work being Plan 9 from Outer Space. I feel bad for this kid. He just wanted to make movies that people would enjoy. Unfortunately for him, nobody really dug his stuff until years after his alcohol-soaked death. Now, we can love these lowest-budget flicks for what they are: So incredibly bad they are great. Fun to watch, fun to make fun of, fun to imagine yourself on the set 50+ years ago as walls shook and gravestones fell over.

Plan 9 is actually an interesting premise. Originally entitled “Grave Robbers from Outer Space”, the title was deemed too gory for the film’s religious backers. So it’s about space aliens who come to earth and resurrect dead people to do stuff like slowly walk into people, killing them. Or something. Actually, I’ve seen this movie several times and I’m still not sure what it’s about. Maybe because I can’t get through it sober. 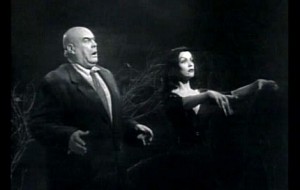 Ed Wood extensively used free, stock footage to fill in the holes in his films. Scenes of cattle stampeding, WWII footage, and people walking around get spliced in at the strangest places. Add Bela Lugosi, who died during filming, Tor Johnson and Vampira to the cast. Then add in a stand-in for Bela, a guy who had the same shaped head, skulking around with a cape over his face for the rest of the flick. Tin pie plates on strings attacking California. Car chases where the cars change to different models when showed in different angles. A shower curtain in the cockpit. Are you confused? Wait’ll ya see the movie. 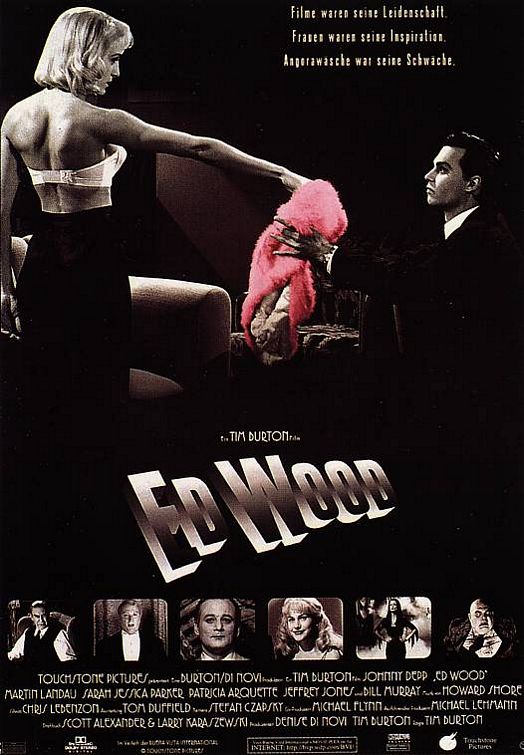 But it’s fun to watch, for certain. So much fun that one of Hollywood’s top weirdos, Tim Burton, made a film about Ed Wood, Jr. and his repertoire of canned junk. Shot in black and white and starring Johnny Depp (of course), Ed Wood is a thousand times better-made movie than any of Wood’s movies ever were. Martin Landau steals the show with his Bela Lugosi character. Vampira looks and acts like the original Vampira. And Ed Wood is so goofy, so much fun you have to wonder if he was really like that, or if that’s how Burton envisions how he must have been.

Either of these films is great on its own. Back to back, they’re a riot. And speaking of Bella Lugosi…

Turn this duet into a trio this Halloweekend with one of the movies that started it all, the original Bela Lugosi Dracula from 1931. Still scary and creepy today as it was 70 years ago, no vintage-style ‘ween is complete without this master of horror flicks. 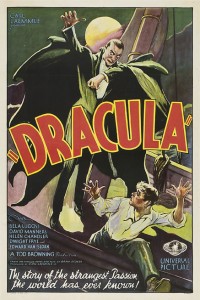 So here’s a few drink ideas for Hallowe’en Weekend, to sip with your movies or push at your party…

Shake vodka, OJ, & cranberry in shaker with ice until well chilled. Strain into a large martini glass, add a small (about a teaspoon) scoop of sorbet and top with seltzer. You can add a few drops of red food coloring to make it really bloody. 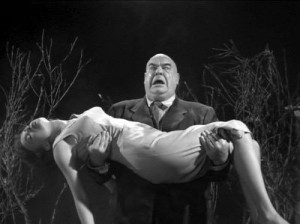 There are a few variations on the Zombie Cocktail. This one, close to the old version but frozen, is probably my favorite:

Blend all ingredients with ice except the 15. Pour it into a tall Tiki mug and flloat the 151 rum on top. Garnish with a fruit slice, sprig of mint, and a cherry. To give it a real kick, add a few sprinkles of cayenne pepper into the mix. Yow! 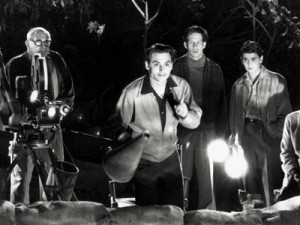 Yep, made this one up at the Tiki Bar. Not really an exotic drink, as there’s no rum, but it’s strong and will probably tear your guts out, so…

This can be served over the rocks, or warmed up in a mug. Stir all ingredients together. float small cubes of apple and pumpkin on top and garnish with a cinnamon stick stirrer. Like I said, strong as hell but krazy fun! 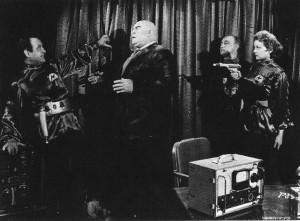 Well kids, that’s all for this week. I know I haven’t posted much lately (This is my busiest time of year) and probably won’t get to another post until Monday, so Happy Hallowe’en to you kool ghouls!