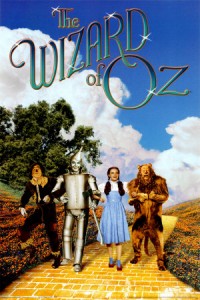 I think we’d be hard-pressed to find anyone over the age of 12 who hasn’t seen (and loved) The Wizard of Oz. So this week’s Mod Movie Monday isn’t really a recommendation for something you’ve probably already seen, it’s a celebration of one of our favorite movies of all time. Dig some trivia, a story or two, and some groovy pix and video here at Tiki Lounge Talk. From 1939, here’s one of our top favorites,

The Wizard of Oz

Back in the old days, ya know, the 70’s, when there were only three networks and a few UHF stations on the tube, TV stations would show old movies just once a year, and they’d make a big deal about it (remember?). Every Thanksgiving my parents would drive us up to Philly to have a giant Italian Thanksgiving dinner with our giant Italian family. Football would be on the TV in living room until eight o’clock, when my uncles would be shooed away to the upstairs bedroom so the rest of us could watch that spectacular of spectaculars, The Wizard of Oz.

The first time I saw the movie was on my Aunt’s 27″ Color Console TV. It was amazing. What a thrill it was when the black and white movie suddenly burst with color! Considering we only had black and white TVs until around 1976, it was a hell of a thrill. 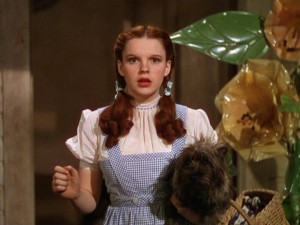 Of course I had a crush on Judy Garland for most of my young life. Who wouldn’t? The way she sung Over the Rainbow…and later, songs like Zing! Went the Strings of My Heart…To me, she’ll always be that pretty, young chick she was in 1939.

The Wizard of Oz has a lot of kool trivia linked to it. Here are some of the best, in my opninion:

• The “Black and White” scenes that most of us remember from seeing the film on TV 30+ years ago were actually not originally black and white. They were Sepia tone. The new DVD version has restored the Sepia, making the split from Dorothy’s colorless world to the bright colors of Oz even more striking. 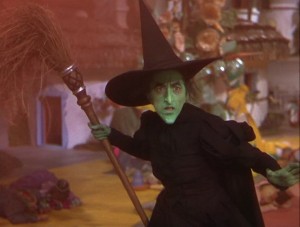 • The production of the movie has been called ‘cursed’ for many years. All sorts of krazy things happened before, during and after filming, including:

-A sudden change of directors two weeks into shooting and an additional three before it was done;
-14 writers were needed to finish the script;
-Buddy Epson, the original Tin Man, going to the hospital for inhaling Aluminum Powder from his costume (and losing the roll);
-Fires on the set, including the infamous scene where Margaret Hamilton (Wicked Witch of the West) gets 2nd & 3rd degree burns while disappearing in a cloud of smoke;
-Someone stepped on Toto and he was out for two weeks;
-Several of the monkey men were injured when the wires holding them up while flying broke.

• “Over the Rainbow” was almost cut from the film.

• The original run-time of the the film was over 120 minutes. Nearly 20 minutes was cut out of the first film, including entire musical numbers, lines by the Wicked Witch, and scenes in Kansas.

• A screenplay, completely unused, was penned by Ogden Nash.

• The yellow brick road showed up as green in the first test prints using the new Technicolor.

(for much more trivia, check out IMDB’s trivia page Here) 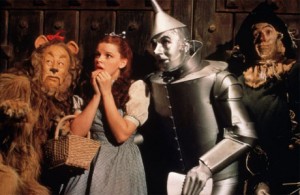 Just watching movies like this is always a blast, but getting to do a little research on them can be very enlightening. While reading through the trivia on IMDB, I found this, which made my heart break, but made me happy at the same time:

“In 1898, Dorothy Louise Gage was born to the brother and sister-in-law of Maud Gage Baum, wife of author L. Frank Baum. When little Dorothy died exactly five months later, Maud was heartbroken. Baum was just finishing “The Wonderful Wizard of Oz” and, to comfort his wife, named his heroine after Dorothy, changing her last name to Gale in his second book. Dorothy Gage was buried in Evergreen Memorial Cemetery in Bloomington, Illinois, where her grave was forgotten until 1996 when it was rediscovered. When Mickey Carroll, one of the last existing Munchkins from the movie, learned of the discovery, he was eager to replace her deteriorated grave marker with a new one created by his own monument company. The new stone was dedicated in 1997 and the children’s section of the cemetery renamed the Dorothy L. Gage Memorial Garden, in the hope that bereaved families would be comforted in thinking of their lost children as being with Dorothy from “The Wizard of Oz”. 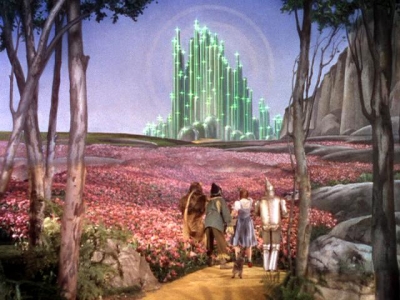 Here’s Judy Garland singing Over The Rainbow from the original Sepia print (embedding is disabled, so just click on the link to view on YouTube)

It’s been 71 years since The Wizard of Oz first dazzled us on the Silver Screen. Three, four generations have enjoyed it and as long as there’s a way to watch video, this flick will remain one of the all time favorites.