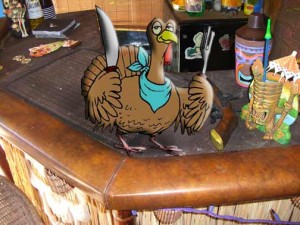 Cheers to you kids! It’s Thanksgiving Day, and with things the way they are today in the world, we have to remember we still have plenty to be thankful for.

Funny, that last statement. It’s been laid down by every generation of Americans since the Pilgrims landed their tub on Plymouth Rock. Our country is great because we’ve had to fight for every damn thing we have, from the Re-Vo war to fighting moron bank investors today, it’s been an uphill battle (I love that cliché) but we always seem to come out tops. So this holiday, be thankful you have a computer to read this on. We take these little machines for granted, but a lot of kats and kittens don’t have the beans to trade in for a MacBook. Be thankful that we haven’t been bombed by some goofy-assed terrorists. Be thankful that even though times may be tough, and we may not be living as high as we were a few ticks ago, that we’ve still got the things we’ve got and the people we dig…and we’ll always have Tiki…no one can take that away from us.

-Tiki Chris P giving you the bird from charcoal smoker behind the Tiki Bar!

Thanksgiving Dinner at the Tiki Bar

This year, just like last, we’re smoking our turkey on the charcoal smoker with mesquite wood. Mmm, mmm good. I soaked that puppy in an apple juice/orange & clove brine last night, and fired him up at 8:30 this morning. Don’t ask me how I got up so early on a holiday. Let’s just say I plan to spend most of the day relaxing by the pool and drinking Southern Comfort Manhattans (that seems to be the drink that fits with the bird). It’s already in the 70’s hear and should hit around 80 this afternoon. The palm trees are swaying in the breeze and I’ve got my Ritual of the Savage LP playing on the Hi-Fi. Besides the smoking, the dinner itself will be mostly traditional: stuffing, mashed potatoes, yams, you know the drill. Maybe I’ll throw a few pineapple chunks around just for fun;) 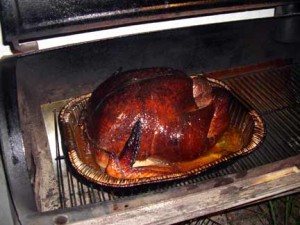