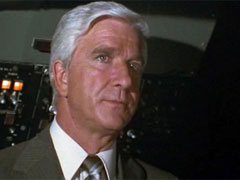 If I were to list all the movies and TV shows Leslie Nielsen appeared it, I’d have to have my ISP increase my bandwith. Leslie Nielsen started acting on-screen in 1950 and never took a break. For 60 years he’s been entertaining us, first as one of TV’s early tough-guy actors, appearing in just about every TV show that was on the air from Rawhide to The Untouchables, The Fugitive to Route 66, and later Love Boat to Fantasy Island to The Golden Girls and everything in between. He was the Commander in Forbidden Planet long before Airplane! changed his career, exposing his hidden comedic talents. Later he was Dracula in Dracula: Dead and Loving It, Mr. Magoo and of course LT. Frank Drebin in Police Squad! and The Naked Gun movies. (He was actually in an episode of The Naked City, too). He continued to make screwball comedies, playing it straight (yet funny as hell) through the craziest of rolls in movies like Spy Hard, Scary Movie 3 and Superhero Movie. According to IMDB, he was working on two movies recently.

From ingenue to comedic genius, Leslie Nielsen has had (in what might have been his own words) a long, hard, throbbing, full career. But nothing came close to his completely understated performance in

In 1977 three guys with twisted, warped minds got together and made a movie. It was called the Kentucky Fried Movie, and David Zucker, Jim Abrahams and Jerry Zucker (along with young director John Landis) had the world roaring with laughter as they mangled the use of puns and brought their sketch-comedy movie spoofs to the silver screen. An uncredited actor did a voice-over for a sketch entitled “Feel-Around”. The voice was Leslie Nielsen’s. They must have liked him, because they brought him in to play Dr. Rumack in Airplane!

The Movie: Airplane! is a spoof of airline catastrophe films like Airport, Airport 77, Concord: Airport 79, etc. etc. that were popular in the ’70s. In mid-flight, everyone on the plane gets food poisoning, including the pilots. A young WWII aviator (time means nothing in this flick) who swore never to fly again has to take over the controls. There are plenty of slapstick gimmicks and silly lines, but Nielsen steals the show with simple lines like,

Doctor: “This woman has to be gotten to a hosptital.”
Girl: “A hospital? What is it?”
Doctor: “It’s a big building with patients, but that’s not important right now.”

Mr. Nielsen, surely you will be missed.

“Of course I’ll be missed. And don’t call me Shirley”