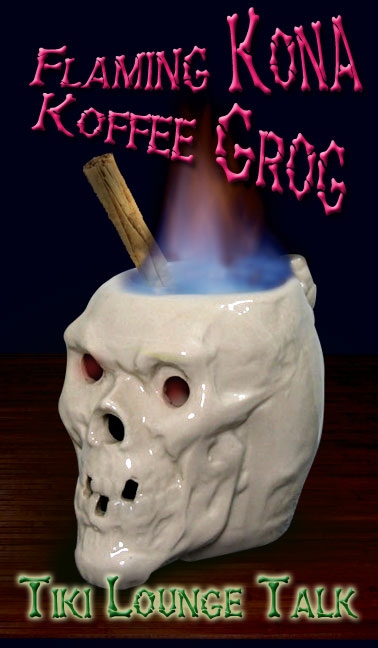 Nothing says “Tiki” like a flaming skull full of Hawaiian coffee and 70%-alcohol rum. Just watching the tanned girl in the sarong pouring that blue flame of 151 into the mug from two feet above in the darkened corner of the Tiki Bar is enough to get my engine revving up something fierce. And once that hot concoction goes down…man, oh man! Heaven, Daddy-O.

There are several recipes floating around for this coffee cocktail. The Mai Kai in Fort Lauderdale makes an incredible version, but they guard their secret recipe like gold (even if I could find it, I wouldn’t post out of respect for them). But I think Beach Bum Berry’s recipe really hits the spot. Maybe not the easiest drink to make, but hell, if they were easy, they would be really be exotic. Here it is:

Turn out the lights, except for enough lit candles to set the mood. Warm cloves, peels, Grand Marnier and rum in a Pyrex dish (or that fancy little pitcher made for such drinks) and ignite. Place coconut cream in Tiki skull mug, then add hot coffee and stir. Carefully spoon the flaming mixture on top; play with the flame a little to make a good show, and stir with cinnamon stick. Make sure you put out the flame before serving to already-drunk friends.

2 Replies to “Flaming Kona Coffee Grog: Your Tiki Cocktail for the Weekend”