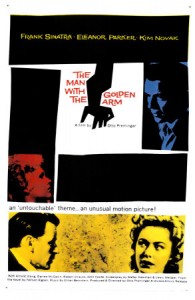 Continuing our foray into the dark and dirty underworld of mid-20th century addicts, this week we’re diggin’ in to one of the most powerful portrayals of a heroin addict ever dared to be shown on the silver screen. From 1955,

The Man With The Golden Arm

Gritty, true-to-life, this movie not only shows the dark side of life, but throws it in your face. From Sinatra’s character shooting H, to showing him going “cold turkey”; from the way the pusher slowly pulls him back in; from the subtle yet obvious sexual relationship with Novak’s shady burlesque dancer character…the flick doesn’t pull any punches. Otto Preminger made it so realistic that The Motion Picture Association of America originally refused to let it fly. It wasn’t until a year later, when the by-laws were changed to allow drugs and prostitution in movies that it finally got the MPAA certification.

Sinatra, coming off his high from “From Here to Eternity” jumped so fast at the part that Marlon Brando didn’t have a chance to say yay or neigh. He plays the horse-addict character with such force, you’d think he was really high on heroin – and getting sick coming off of it – on film. Anyone who says Sinatra wasn’t an actor oughta have his head banged in with a hammer.

Compare this dirty, realistic portrayal of real drug addicts to the hopped-up, over-exaggerated “dope fiends” in Refer Madness and High School Confidential, and you’ll see why this movie is such a stunner.

The story is about a recovering heroin addict who, just getting off a six-month vacation at a rehab prison, returns home to his invalid wife and old pals with a new look on life. While in the joint he learned how to play drums…a real natural, a guy with golden arms…and even has an audition set up with a band, to go straight. But the pressures that led him to the monkey come piling back fast, and before he knows it he’s back in his old role, dealing cards for gangsters, taking speed to stay awake, taking H to forget his troubles. You can imagine where things go from there…or you can watch the movie.

As usual, I won’t give anything away here. Let’s just say that when you’re done watching this flick, you’ll wonder why anyone would ever do drugs in the first place. It’s rough, really tough. And dark. Hence, Film Noir. 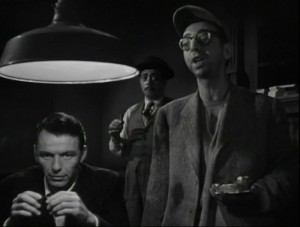 McGavin (yeah, the dad from Christmas Story) delivers one of the best lines of the flick, as the pusher: “The monkey is never dead, Dealer. The monkey never dies. When you kick him off, he just hides in a corner, waiting his turn.”

Food & Booze: I would suggest buttermilk and cold turkey.

A final note: When I was a kid, my family (who loved this movie) said it was based on the story of Gene Krupa, the swing drummer for Benny Goodman (who later had his own big band). He was supposed to be a hop-head, a horse addict who got kicked out of Goodman’s band for showing up high too many times. Since then I’ve read a lot of conflicting reports on this story, all the way down to how the movie had nothing to do with Krupa, and that he never had a monkey on his back. In fact, he had been busted on a trumped up reefer charge, and that was about it. Amazing how rumors used to fly in the old days before the interwebs, huh?

-Tiki Chris P. reporting from the back room…the one behind the hidden panel, in the back of that dark, shady bar you try to stay away from.

One Reply to “Noir Movie Monday: The Man with the Golden Arm, 1955 starring Frank Sinatra”