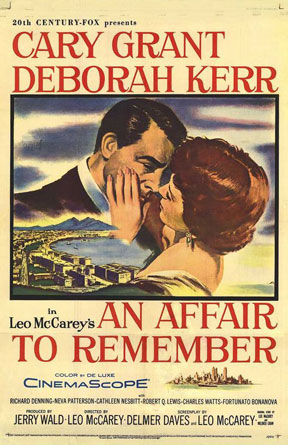 Here’s a special edition of Mod/Noir/Retro/Vintage Movie Monday for Valentine’s Day. Love is in the air, and it’s contageous…so grab your favorite guy or doll and watch

An Affair to Remember

from 1957 starring Carry Grant and Deborah Kerr. Absolutely one of the most romantic movies ever made, even hardened tough guys dig this flick. The plot is simple: Grant and Kerr meet by chance on a cruise ship and fall in love. They know their love is taboo, since they are both engaged to other people. But their love is strong, and they agree to meet six months later at the top of the Empire State Building. 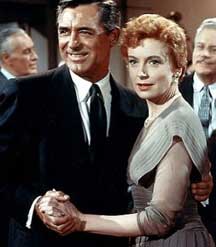 If I say one more word on the story I’ll give away the whole thing, so I won’t. I can tell you this is a beautifully made movie, with a fantastic score and lavish settings. Although Grant is in his early 50s (and Kerr in her early 30s) the romance works perfectly as Carry charms his way through the movie. Interesting notes: • The two lovers make their vow to meet at the Empire State Building at exactly the halfway point of the movie, 59-1/2 minutes into the 119-minute flick. • An Affair To Remember is listed as the #5 greatest romance of all-time by the American Film Institute. • This is the flick that was referenced in 1993’s Sleepless in Seattle. After the release of that film, a renewed interest in An Affair To Remember resulted in over two million video tape sales.

My Take: I’ve never been one for romance flicks. My mother suggested I watch this movie many moons ago, and I guess she knew me well, because I loved it. I don’t exactly why…but it’s the kind of movie that appeals to everyone, not just chicks. 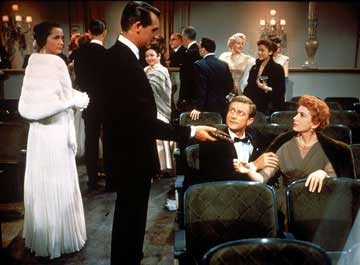 Food & Booze: This is the perfect movie to watch while sharing some fondue and wine. Here’s a quick and easy recipe for perfect fondue: 1 lb shredded cheddar, jack, and/or Swiss cheese 1/4 stick butter 3 cloves minced garlic salt & pepper 2 tablespoons Worcestershire sauce flour 1-2 cups beer Toss the shredded cheese with some flour, just enough to coat lightly (this helps with the melting). Flatten one cup beer (by swirling) and add to heated fondue pot. Toss in the butter, garlic, and Worcestershire, and stir until butter is melted. Add a pinch or two of salt and a few shakes of pepper. Then add the cheese a little at a time, stirring constantly till you get a nice, smooth, cheesy fondue. Add a little more beer or more cheese as needed. If you put too much beer, you’ll get cheese soup. Too little and your fondue will be glorpy. Serve with toast points, apple slices, or fresh vegetables for dippin’. Mmmm mmm.

One Reply to “Happy Valentine’s Day from the Tiki Bar! Here’s An Affair To Remember, from 1957 for Mod Movie Monday”