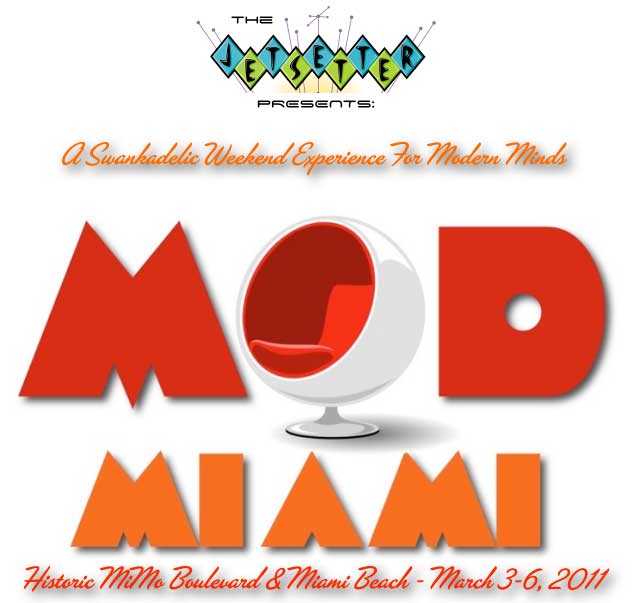 As the swingin’ website says, this weekend cocktail soiree is for hipsters, Tikiphiles, lounge lizards, ultra-mods, swanksters and other jetsetters…and if you’re reading this, you probably fall into one of those groups.

The lineup touts some of Tiki Lounge Talk’s favorite retro-tastic performers, including…

and much more, including several DJs, live acts, a fashion show by Black Cat Bikinis, and The Superions featuring Fred Schneider of the B-52s. Yeah.

There’s also a walking tour of the MCM area surrounding the event’s headquarters, the New Yorker Boutique Hotel, a recently renovated, original MiMo motel on Biscayne Boulevard. (What the hell is a boutique hotel, you ask? It’s an old motel that’s been transformed into something a little cooler, dig?)

“MiMo”, or Miami Modern, is a fairly recent term coined to fit the style of mid-century architecture and design that it so specific to South Florida. (Back in the old days we used to refer to it as Florida Deco, or Miami Deco). The style incorporates much of the mid-century modern styles popular in California and the shore towns of the north east (i.e., Wildwood, NJ) with Art Deco and Spanish influences. Let’s face it, nothing screams Deco or MCM like a pink hotel on the beach with palm trees and a turquoise ’56 T-bird in front, with Exotica music playing in the background and a beautiful chick in a sarong serving Zombies and Cuba Libres. You hip?

So if you’re in town this weekend, take the wheel of your automobile and swing on down to Mod Miami. I’ll see you kats and kittens there Saturday night.

-Tiki Chris reporting from the beach, across from a row of Art Deco hotels in Miami, Florida