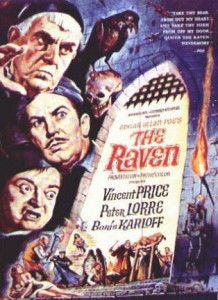 When you think Vincent Price, you usually think of dark, black and white horror films or technicolor flicks that were made especially to show the deepness of the reds of freshly-spilled blood. Not this time, kids. Teaming up with Price, Peter Lorre, Boris Karloff, Hazel Court, and a very young Jack Nicholson, Roger Corman leads the way for this very loosely-based version of Edgar Allen Poe’s The Raven to a kookie, campy, very-often silly spoof of the horror genre, 1963-style. 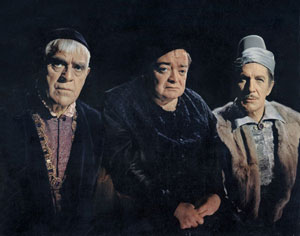 As I said, this flick is very loosely based on Poe’s masterpiece. There is a raven. There’s a Lenore, who’s been lost, sort of. There’s a bust of Pallas, and knocking at the chamber door. It pretty much skews away from that point on. Vincent Price is a magician (sorcerer, I suppose) who only practices his magic for his own amusement. Peter Lorre runs into some…eh…trouble, with another sorcerer, and comes to Price for help. Silliness ensues.

Shot in beautiful technicolor in front of elaborate, Middle-Age (I guess) style sets, the movie is fun to watch and fun to make fun of. The acting isn’t so great, and it seems as if the actors were having way too much fun spoofing themselves to take anything seriously. Price, in more than on scene looks like he’s going to burst into evil laughter at the ridiculousness of the whole thing. Highly recommended.

Food & Booze: Movies like this always make me think of mutton. Since I’m not even sure what the hell mutton is (lamb? goat? Should I bother to google it? nah), maybe some of those giant turkey legs you find at the Renaissance fair will work, or a roast chicken on a spit. Big, chunky vegetables for sides, you know, like hunks of potato, carrots and celery. Lots of thick gravy. Maybe a mince pie. Be creative. Serve with a flagon of mead. Or a cheap bottle of wine.

Believe it or not, there actually is a Raven cocktail. No, you’re right, I wasn’t surprised either. Here it is, from drinksmixer.com:
1 oz vodka
1 oz white rum
1 oz Blue Curacao
3 oz 7-Up
2 oz peach schnapps
1 dash Vimto® blackcurrant squash concentrate or any dark fruit concentrate
1 chopped lime (optional)

Mix ice, vodka, rum and the blue curacao together and shake, pour all of it into into a tall glass and add 7up and peach schnapps. Add a dash of vimto concentrate to the top which will settle to the bottom of the glass giving a Ravens wing effect, add the lime to the top and DO NOT STIR. Looks great with a black straw.

My Take: Somehow, this movie escaped my line of sight until last week. My mother was a huge horror movie fan, with Vincent Price being one of her idols. She made it a point to expose me to just about every Price movie ever made, but for some reason I don’t think I ever saw this one. Although it is possible I saw it when I was, say, three, about the same time she tried to get me to watch Dark Shadows. Yeah, that screwed me up for a lot of years. But I’m fine now, teh-he teh-he teh-he.

-Tiki Chris Pinto reporting from the dungeon below the Tiki Bar at Tiki Lounge Talk!

PS: There’s a new movie due out this year entitled “The Raven”. It’s a fictionalized account of the last days of Edgar Allen Poe’s life starring John Cusack. It seems to be a murder mystery…nothing at all like the poem or the original movie. FYI, I hate it when Hollywood reuses movie titles. All it does is diminish the significance of the original film and confuse people, especially when it has nothing to do with the original. So, Hollywood, knock it the hell off. -CP