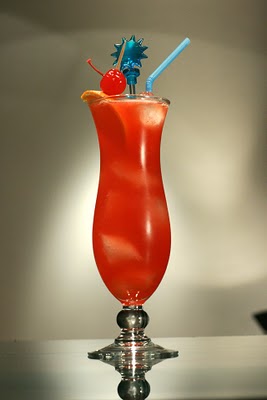 June 1st kicked off Hurricane Season here in Sunny South Florida. That can be very scary if you’ve lived through a hurricane. However, if you drink enough rum, you can get through anything.

Such was the case at Pat O’Brien’s in the late 1940s. Forced to buy extra cases of rum in order to get his whiskey orders filled, Pat (I guess) found himself surrounded by the stuff, and needed a way to dump it without losing his shirt. So he (or someone there) invented

Now, as it is with most exotic cocktails, the original recipe has been twisted and bastardized until it’s something completely different. I even found a recipe using ‘almond syrup’. I think they got a half-assed Mai Tai recipe confused with a Hurricane. Anyway, I even checked out O’Brien’s site…lotta good that did…their recipe says to mix rum with O’Brien’s Hurricane mix. Yeah. Thanks.

So here’s the recipe that seemed like it would be close to something made during the golden age of drinking. It’s complex but not too complicated. It sounds like it would taste good. And it has two kinds of rum, thus perpetuating the “I came up with this concoction to get rid of all this damned rum” story. 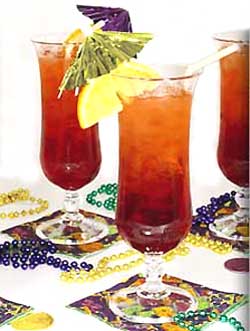 Throw everything into a shaker with ice, then squeeze in the lime. Shake it up real good and strain into a chilled hurricane glass. Garnish with the orange and cherry and a little paper umbrella.

You could make a frozen one by blending with ice until smooth, if you want to add that ’80s feel to your party.

Enjoy your Hurricane, and let’s hope there aren’t any real Hurricanes this year, ok? Kool.

-Tiki Chris P. reporting from the Hurricane shelter in the garage at Tiki Lounge Talk.