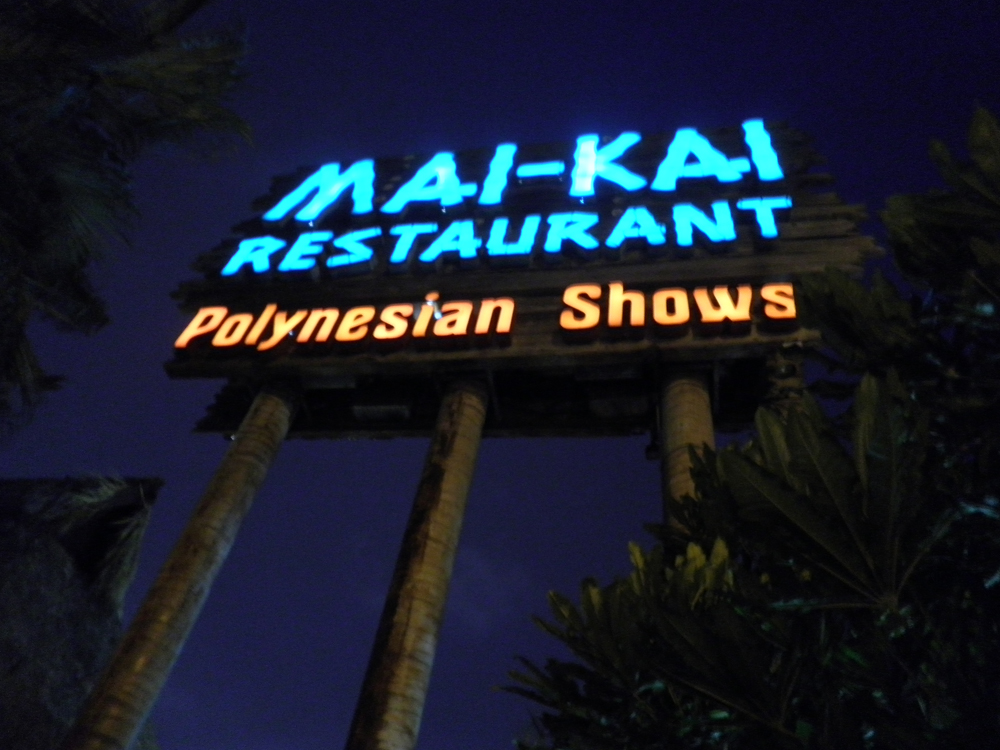 The Hukilau 2011 was crazy, fun and swingin’, as you kats and kitties can imagine (or know for a fact if you were there). I promised a bunch of you that I’d post pix and stories…well, I had so much fun I didn’t take too many pix, but got a few. Plus a few good stories I remember, through the rum-induced haze.

Here’s a slide show of my pix. I know they ain’t great, but some are fun. You’ll notice I didn’t take many photos of people. It’s because I’m a decent writer, but as a photographer I suck eggs!

I tried to see and do everything, but just couldn’t. One of my favorite parts was watching Marina the Fire Eating Mermaid and her pod of lovely swimmers performing at the Wreck Bar at the Yankee Clipper. We got there early and for the first time got a front row seat at the bar. What a show! She was joined by a few surprise guests in the water, too…including the Creature from the Black Lagoon and an airline pilot (from the Tikiyaki Orchestra). Kookie stuff. The Wreck Bar served a special drinks called the Fire Eating Mermaid, a pretty blue concoction garnished with a gummy fish. Afterwards we saw the mermaids outside at the pool as they got their pix taken with the crowd. We didn’t get our photo taken then (there were a zillion people there) but I do have this photo of them with and my book, Murder on Tiki Island…Marina is on the cover 🙂

Speaking of mermaids, there was a great presentation by my pals at Vintage Roadside. They traveled all the way from Portland, OR to bring us Aquarama: Girls Who Live Like Fish. They gave us the story of an aquatic show that flourished in the midwest through the 1960s, featuring vintage video, photos, recordings and even actual costumes worn by the performers. You could tell they put hours and hours of research and work into this project, bringing back a part of history that may otherwise have been forgotten. Marina was also there to help with the presentation, and dedicated one of her fish tails to the collection. Definitely a highlight of the event!

Another symposium was “Hawaii – Sailors, Sex and the Birth of Old School Tattoos” by Paul Roe, owner and head artist of Britishink Tattoos in Washington DC. This was an amazing look into the history of Tattoos in America, how the art evolved, and how the original styles influence the art today. I had the luck of sitting next to Paul at The Mai-Kai, and although the Jet Pilots and Mai Tais made the evening a little fuzzy, I remember him saying he’s done (I think) thousands of tattoos. Pretty sure that’s what he said. Anyway it was a fascinating presentation about a subject I know very little about, so it was very kool.

The Thursday night kick-off party was a blast. I don’t remember much of it, and we didn’t stay long because I had worked all day as Vendor Coordinator, but I remember fire, The Tikiyaki Orchestra, Meyers and Coke, a really good hamburger, a rum challenge and a lot of people in Hawaiian shirts.

(I didn’t get any photos of these. I was having too much fun.)

Saturday wasn’t as much of a blur but still blurry. I missed Beachbum Berry’s Rumposium, which was a letdown, due to a little bad planning on my part. But happy hour and the dinner show at the Mai Kai more than made up for it. I started out with a Jet Pilot (ker-razy strong drink, but I love it) and ended with a Mai Tai. The show was fantabulous as usual…they had a new announcer (Sonny retired after 400 years), a cute Aussie chick with a nice accent. The hula girls and the fire dancers were even better than I remember. King Kukulele started things off with his usual yucks and a few tunes, including The Hukilau Song…of which NOBODY knows all the words. Starts out ok, then kind of goes like…”We’re going to the Hukilau, where the mmmrrmmrm mrmrm mrm something Hukilau”…yeah.

Colleen and I both got steaks from the Chinese ovens. These are prime cuts roasted over applewood. The Mai Kai has some of the best steaks I’ve ever had…so good that Colleen, who is 90% vegetarian, ate a New York Strip. I had the filet. She also got the Lobster bisque which she says is the best she ever tasted. We of course got appetizers…and those glorious drinks. For desert I got the Bananas Bengali, basically Bananas Foster served flaming tableside. The production they make of this rivals the show. Thank Tiki for 151 rum, huh?

Tiki Kiliki, aka Christie White, the organizer of the event made a few very nice speeches and thank yous at the dinner, including giving gold-cast Hukilau mugs to some of the people who helped with the event, including yours truly. That was nice 🙂

We hung out for a while at the Molokai bar at the Mai Kai, rapping with some new friends, and some old friends. It was too packed to get a drink so we wound up back at our room by around midnight. We were down for the count…but most of the clan didn’t quit until the wee small hours.

Sunday was kool. Someone at The Mai Kai had been scrapbooking back in the late 60s all the way up until the mid 90s, and they opened up the archives for view…and I mean they let us open the scrap books and look through them. It was fantastic, photos and press clippings going way back. Someone even brought photos of the Mai Kai’s first celebrity bartender from the late 1950s. Amazing stuff.

One of the people I met during the event was Tricia who runs the gift shop at the Mai Kai. Three very kool things came out of this meeting…one, I got to meet a very groovy chick who was a lot of fun during the event, two she agreed to put my book in the Mai Kai’s gift shop (YEAH!!!!), and three I got a sneak peak at the separate building there which was damaged in Hurricane Wilma in 2005 and closed…they use it for storage now. In fact they have about 80 or so old chairs from the 1980s that they are selling to the public stored there. They don’t usually let people in the building…sadly, it’s been damaged pretty badly…so it was fun to see inside a part of this historic place that hadn’t been seen by many people in six years. Tricia has some excellent ideas on how to renovate the building that could certainly help the Mai Kai…hopefully they’ll be able to do something with it soon!

I missed the meet & greet with Dick Dale, unfortunately, because I had to fix Colleen’s Jeep (starter died). Hopefully he’ll be back next year.

I think that’s about it. Lemme tell ya, it went by way too fast. Next year I’m bringing a bunch of no-doze with me so I can do even more.

By the way…a note to all the vendors of this year’s event…this was my first time as Vendor Coordinator, and I’d just like to say thanks to everyone one of you who helped make this year’s event even more fun, especially my buddies Bob Ho (Tiki Hana), Robert Jimenez (Tiki Tower), Peter Janus (Tropiki), Tahiti Joe, Tiki Mon, Tiki Diablo, Tricia, Renee, Tom, John…oh hell, I can’t list everyone! You were all great…thanks again!