Here’s a very stylish, very cool flick…a movie that has “Dark” in the title, and it doesn’t get much more ‘noir’ than that.

What the hell is going on in this movie? is what you’ll be asking yourself in the first 15 minutes. Very strange imagery throughout, the viewer is thrown into a state of surreal chaos from the opening seconds. Written and directed by Alex Proyas (The Crow, I, Robot) this sci-fi mystery combines visual styles from steampunk (real steampunk, not that plastic gears on blue jeans crap) to art deco to industrial to nautical, blending everything together in a crazy mash-up (and for good reason, which I will not divulge here…remember, no spoilers at the Tiki bar).

Kiefer Sutherland plays a very, very strange character in this movie, so far removed from Jack Bauer or the Lost Boys it’s hard to believe it’s him. Jennifer Connelly has a smaller part, but still manages to be one of my favorite chicks of all time. Rufus Sewell does a great job as a guy with amnesia who has no idea what the hell is going on (that phrase will pass through your mind several times, but don’t worry, it will all be clear by the end). 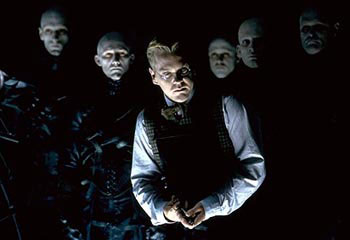 The story: Can’t say too much, because I don’t want to give anything away. The best thing about this movie is that it’s so far out there, literally far out there. Watching the ‘truth’ unfold is half the fun. Basically a guy wakes up in a bathtub, remembers nearly nothing, not even who he is, and finds he is being chased for a murder he doesn’t remember committing. Sound normal? Forget about it. It all goes crazy from there. Especially when he sees the city (which seems to exist only at night) change. I mean, like buildings coming down and new ones popping up. ‘nough said. 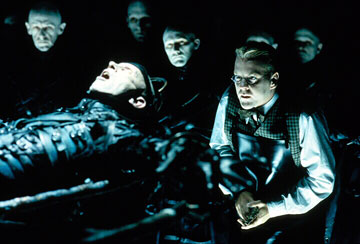 The reason this crazy flick makes it to the Noir Movie Monday spot is that the city, cars, clothes, everything…is all a combination of our recent past, mixing styles of 1920s art nuevo, 1930s art deco, mid century modern, doo wop, you name it. From a Horne and Hardart-style automat to 1950’s cars mixed with 70s cars and 30s clothes, the whole look and feel of the movie is vintage (which, as I said, is explained later in the flick). Add to that some very kreepy undertaker-looking kats, and Jen Conelley performing the steamiest version of “Sway” I’ve ever heard (it should have been longer) and a very original story, and you’ve got a winner.

What I really like about this flick is that it takes you to places you’d never expect, both physically and plot-wise. Everything is constantly changing, with the main character’s quest to find his identity (and what the hell is going on) the only constant. 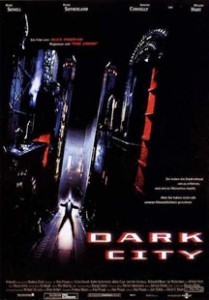 Food & Booze: Hard to pull anything from the flick as nobody ever seems to actually eat or drink anything. But…just for fun, I’d go with the theme of the different eras, maybe homemade baked bread with a TV dinner and Kraft macaroni and cheese. Wash it down with an old fashioned followed by a slippery nipple. Catch my drift?

By the way…Richard O’Brien was Riff Raff in The Rocky Horror Picture Show. Proyas wrote the part in this movie especially for him.

Watch this one with the lights off for the best effect.

Here’s the scene with Connelly singing “Sway”. Actually not sure if it is really her singing or not…according to the info on the video it is her, not the voiceover that was done in the released version of the movie.

Do you like noir mysteries? Do you like what you read here? Then you should check out Stardust Mysteries, with my novels Murder Behind the Closet Door and Murder on Tiki Island!