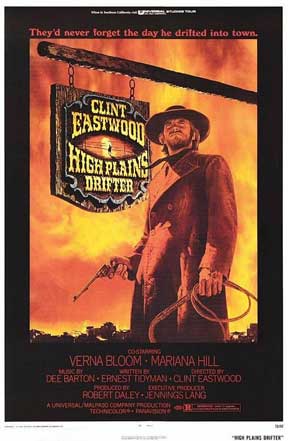 I don’t usually swing with cowboy flicks, but there are a fist full of really kool Spaghetti Westerns that definitely make the cut. One such classic is

from 1973, starring and directed by Clint Eastwood.

Now, I said Spaghetti Western, which isn’t entirely true. This flick was made right here in the good ole U.S. of A, not in the mountains of Italy. But…it certainly has the SW look and feel, except maybe for the lack of dubbing over Italian actors’ Italian dialogue.

This is one of those “man with no name comes into town, shows he’s a great gunslinger and gets hired to kill the bad guys” movies. With a twist. Eastwood’s character is so tough and mean, he’s got the whole town under his thumb in the first 10 minutes. You find out later that the stranger has a secret…as does the town…and thinks veer off slightly into the paranormal. 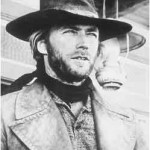 Yes, I said paranormal. Very subtly. I won’t give it away here.

There’s some heavy-duty violence in this one (still makes me cringe) so keep the kiddies away. The story is weird and keeps you guessing, even when you figure things out. This was Clint’s first time directing a western, and man, did he nail it.

If you’ve never seen this flick, there is one main part that you may have come across over the years: The Stranger paints the entire town red, and renames it Hell. It’s one hell of a tough image.

Food & Booze: There’s a scene in the movie where they’re having a dinner of fried chicken and French wine. Seriously. Add a side of home made mashed taters and some BBQ beans and yer all set, Stranger.

Here’s the original theatrical trailer for the film. Following it is a fan-made trailer, that IMHO is actually better. Check it out. 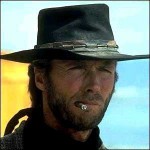 One Reply to “High Plains Drifter, 1973 with Clint Eastwood for Mod Movie Monday”