It seems like just yesterday I was writing a Happy New Year post here under the swaying palms. 2011 went by pretty fast…maybe not fast enough for some of us kats! But it’s over now, just a few hours left as I write this post. This is definitely one of those years that needs to end with a big BANG and you can bet your bottom buck we’ll be doing just that.

Swingin’ in the New Year should be fun and full of music, dancing and booze. Just remember to play it safe, kids. You know I’m always hawking drinks on this page, as cocktails are part of what make living the Tiki good life so good. Drink up, enjoy ’em all ’til you’re as happy as a clam…just remember to do it right, and don’t do anything stupid like trying to drive, or ask your boss for a raise, or operate a steam-shovel while loaded!

Here’s a couple of my favorite New Year’s cocktails. One is full of wonderful booze, the other is the world’s greatest non-alcoholic cocktail for any aged partyer.

I’ve featured this krazy cocktail a few times already here at Tiki Lounge Talk, but I can’t get enough of it. I had my first Banana Banshee at a New Year’s Eve Party in 1977. It was all the rage in the mid 70s in Philly, and it just seemed to fit perfectly with the disco music and white polyester suits. Later I found out it was a much older recipe, having a good run in the 1940s and 50s but without the ice cream. Either way, anything with bananas in it is OK with me for the TIKI BAR!

Ok, I wasn’t old enough to drink in 1977, but it was my Uncle’s house, at his swingin’ basement bar, and he made one with less alcohol in it just for me. I’m old enough to enjoy the full hit of booze now, so here it is:

Throw all ingredients in a blender and blend on high, in 5 second bursts, until the ice is crushed and the drink is thick and drinkable (don’t liquefy it trying to make it smooth). Garnish with a pineapple wedge, a cherry and if available, chopped fresh coconut. Don’t forget the umbrella. Makes about two tall servings. 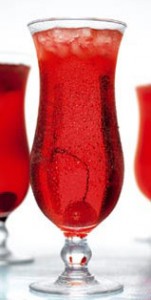 Like everything else in the world, good old fashioned drink recipes get changed and updated until they are unrecognizable. I’ve seen some kookie variations on this non-booze drink, but the original is still the best…for any age.

Fill a highball glass half-way with ice cubes, and add the ginger ale until almost full. Add about two tablespoons of grenadine, drop in a couple of cherries and stir. If you don’t have grenadine the cherry juice is just as good, maybe better. Everyone has their own taste when it comes to how much cherry flavor to add, so start with the two tablespoons and add a teaspoon at a time until you dig it. That’s it!

While the rest of the country is enjoying the freezing cold, bundled up in heavy coats and scarfs as they swing down to their NYE party, we in SoFla will probably be wearing Aloha shirts and short skirts as the temperature today is already in the high 70s. This means there will be a lot of outdoor fun, including fireworks, concerts on the beach, booze cruises, and lots of bar hopping in Fort Lauderdale and Miami. There’s nothing quite like toasting the new year in 70° weather, on the beach, under a palm tree.

This year the little lady and I will be celebrating with some friends at a good old fashioned house party, one of our favorite ways of swingin’ in the New Year. One thing we haven’t done, which is on the list, is celebrating New Year’s Eve in Key West. I have a feeling that Duval Street would be more fun than barrel of monkeys at the turn of the year!

Happy New Year from Tiki Chris, and the whole Tiki Lounge bunch – Colleen, our pooch Cookie, the cats, the birds, the ’53 Chevy and lizards that live on the lanai.
Here are some last minute ideas for an Atomic New Year’s Eve Party!