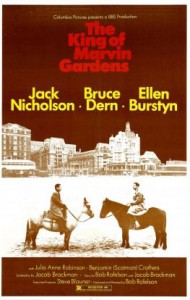 We now return you to our regularly scheduled programs…

Mod/Noir Movie Monday is back, after a brief detour due to the New Year, some crazy happenings, and too much booze (or not enough).

This week we have a somewhat obscure doozy from the early 1970s, a time when movies were in that transitional period between Ocean’s 11 and Jaws, when a film maker could hire Jack Nicholson, Scattman Crothers, Ellen Burstyn and Bruce Dern on a shoestring budget, throw in a bunch of quirkiness, some natural breasts and a TON of location shots of Atlantic City before the casinos invaded…then have that movie become an iconic time capsule of the end of the “old Atlantic City” era, right down to the interior shots of the Marlborough-Blenheim Hotel, doomed to the wrecking ball seven years later. 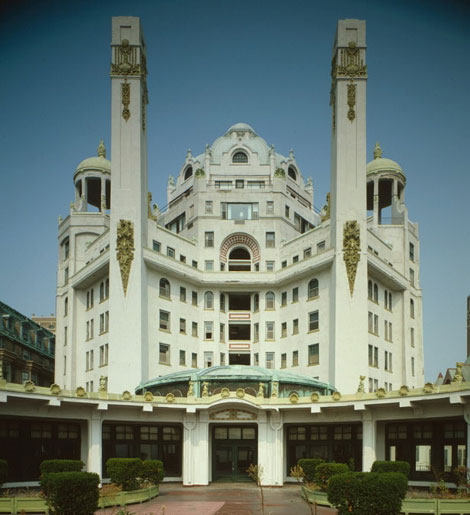 The Blenheim, c. 1972. This was the main setting of The King of Marvin Gardens.

is about a con man (Dern) who asks his brother (Nicholson) to help him start a resort in Hawaii. There’s not much about that storyline going on that’s worth paying any attention to. What you’re watching this flick  for is atmosphere, images, and lifestyles that are long, long gone and mostly forgotten.

Most of the movie takes place in and around the Blenheim part of the historic Marlborough-Blenheim Hotel. Like most things historic in Atlantic City, someone (probably) got paid off to allow it to be imploded so a POS glass and steel casino could be built in its place (but that’s a rant for another post). Anyway, you’ll get a lot of eye-candy of old Atlantic City, including the boardwalk auctions, shots of the piers, the interior of the Atlantic City Boardwalk Convention Hall, interiors and exteriors of some of the great hotels, and even a few cool old cars. Overall, the skyline of Atlantic City in 1972 didn’t look too much different than it did in the 1920s or 1950s…so it’s a fun glimpse into the past.

What? Is the movie any good? Well, that depends on your tastes, of course. If you like movies from this era at all, you’ll probably dig it a lot. Don’t look for a lot of action, suspense, or deep storyline…this move is about characters, and some intense acting  (the acting is very good). It’s basically a slice of life kind of thing, and the characters make it interesting to watch (remember, in this kind of movie the buildings, the boardwalk, the beach are as much characters as the people). It’s sometimes depressing, sometimes funny. You guys who read my posts know I don’t get all “in depth and analytical” about flicks, so if you want a “deep” convo about how groundbreaking or historically important the film is, check out this blog.

Food and Booze: There’s a great scene where they’re eating in Captain Starn’s Seafood Restaurant, which was one of the world famous restaurants right on the boards in the Atlantic City Inlet. They’re entertaining potential investors….so I’d say a nice whole Maine lobster with black butter and Filet Mignon tips, rare would be appropriate. And might I suggest pairing with a 1972 vintage Baron Philippe de Rothschild Sauvignon Blanc…or, for that real old Atlantic City flavor, fried flounder and a Michelob!

My Take: Although I was born in Philly, my family moved to and operated the Star Dust Motel on the Black Horse Pike in West Atlantic City from 1969 to 1973. Like everything kool and old, it was torn down in ’73 and is now an empty lot. I grew up 10 miles west of Atlantic City, but my family hardly ever went there…it was in pretty sad shape in the 1970s, and known more for gang violence and other crimes than as a fun tourist destination. We went to the boardwalk once when I was very young…I have vague memories of looking up at the Marlborough-Blenheim, seeing the rides (but not going on them) on Steel Pier, and driving by The Knife and Fork Inn. We went again when Resorts opened as the first Casino in the old Haddon Hall Hotel (one of the few survivors) in 1978, and I have a few memories of that.

I was only four years old when The Traymore was imploded, but remember hearing about it, remember my parents saying how sad it was. In 1988, I stood on the boardwalk and watch a crane take apart the last bits of the burned-out, crumbling Steel Pier. A few months my buddy Steve and I sneaked into the back of the house at Resorts, went up to the ballroom and watched the Steeplechase Pier burn to the ground (it was directly across the boardwalk…we could feel the heat inside Resorts).

That same year I got a job working as “the balloon guy” for a display company that had 400 semi-permanent Mylar balloons decorating Resorts for its 10-year anniversary. Two years later I was working as a costumed character (kind of like Mr. Peanut) for The Shops one Ocean One, a mall built on the pilings of the original Million Dollar Pier, and eventually became Tourism & Marketing Director. I learned a lot about Atlantic City history while there, not realizing I was living it, and making it, every day. The owners went out of business in 1990, and it eventually closed in the early 00’s, was bought by Caesars, and turned into a high-end Vegas-like shopping mall connected to the casino.

So much of old Atlantic City is gone now…all the hotels, except for The Dennis, that were in The King of Marvin Gardens are gone now, replaced by new casinos. Captain Starn’s in long gone. Marven Gardens (they spelled it wrong in the movie) is still there, in Margate, but is never shown in the movie. All of the piers are either gone, or have been completely rebuilt as modern structures except Central Pier, which still retains its original facade, although badly stuccoed and gaudily painted. The city is an insane mix of mega-modern casinos and decaying 100-year-old buildings, and will eventually become fully modern…so enjoy The King of Marvin Gardens, one of the only remaining glimpses of this great City’s past.

Here’s a short clip from the beginning of the movie…

-Tiki Chris Pinto reporting from the Warner Theater, on the Boardwalk in Atlantic City c. 1972 (metaphysically, of course).