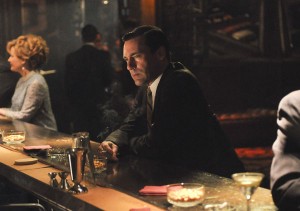 Ok, this is a long post, but I think you’ll find it an interesting one. There are a few insights I came up with that I haven’t seen picked up on in most of the reviews and posts on the season finale. For fans of the era, and retro and Tiki and Mid Century Modern and great film making, this should have been one of your favorites…read on, kats…

I’ve heard a lot of people refer to the Season 5 Finale of MAD MEN as underwhelming. Certainly it didn’t have the emotional bang of the last two episodes, but there’s one thing it did have that sets this episode apart from any other: The ending.

From the moment when Don views Megan’s demo reel until the second the credits roll, this few minutes of cinematic magic is absolutely some of the best I’ve ever seen on TV.

Dig it through my eyes, and you’ll see what I mean…

Don, after flat-out telling Megan he couldn’t help her with the commercial, decides to view her reel. We see the shot from behind Don, the classic Don “drape” shadowed as seen in the opening sequence, with Megan in artsy black and white on the screen. At least at first it’s Megan; slowly, she loses her identity and becomes an actress, a woman on the screen desperately showing her deepest emotions, her soul. She is a star, and she elicits an emotional response from Don – who, as you know, believes that the power behind advertising is its ability to elicit an emotional response.

Something changes in Don; he not only sees Megan as the woman he loves, but as a truly talented performer. He decides to give her what she wants. This scares the hell out of him, but considering how using “tough love” against his brother and Lane turned out, he realizes it’s probably the best decision for both of them. He wants to keep her to himself, wants to be close to her and knows that giving her this break may break them further apart. But he knows evem more strongly that not giving her this chance will absolutely break them apart.

(By the way: EXCELLENT job in making Megan’s reel look authentic, 1960s. Reminded me of the similar scene in Nine) 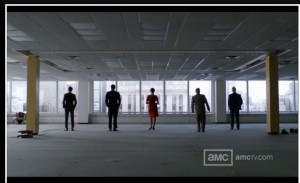 This moodily lit, almost completely black and white scene gently fades into the highly contrasted scene of Joan wearing a bright red dress and carrying a can of red spray paint through a brightly lit empty office, the partners filing in behind her as they check out the new office space. There is no music, only the sound of their footfalls on the carpet floor. Joan marks a “X” where the staircase will be…She is doing much more than that, of course, she is marking her territory, actually, asserting herself fully as a new partner. Only Don seems to notice this assertion for what it is…Campbell, in his own world, makes the comment that he will have the same view as Don. Again, the powerless Pete tries like hell to push his way to the top. With one word, Don puts him in his place…a sort of, but not quite sarcastically said, “Congratulations,” all the while not taking his eyes off of the person he has much more respect and admiration for, Joan.

The camera cuts to the backs of the partners, and in the same way that Don is often shown, the same way that Lane was shown just before he committed suicide, they are shown in a long shot from behind. But this time they are all standing, and almost ceremoniously position themselves spaced equally apart, in what almost seems like a scene from a super hero comic. There they stand, proud and united…yet very, very far apart, alone.

The best is yet to come…

A quick cut brings us to another day where Megan has gotten the part in the commercial. She is in full fairy tail costume ready for rehearsal, thanking Don for getting her the part. She is referred to as “Miss Calvet”, not Mrs. Draper, and as she’s called to her place, she and Don smile at each other.

Watch this scene again and pay close attention to what’s going on here. The camera individually shows Don smiling at Megan, then Megan smiling at Don. Then the long shot shows Megan to the left, getting hair and makeup, brightly lit in a technicolor red and yellow dress. She is now oblivious of Don as they prepare her for her new roll. Don, to the right, is wearing a dark suit and is cloaked in shadow. He gives her one last look, and with the Draper swagger that won the hearts of women throughout the 1950s and 60s, he turns and walks away from her, toward the camera. The camera pulls back as only the sounds of his heavy footsteps can be heard, and as he walks through the soundstage, he literally comes out of the show…leaving the set, leaving the fantasy of his life with Megan, essentially leaving the last five seasons of MAD MEN behind him, past the cameras and stage lights, alone. 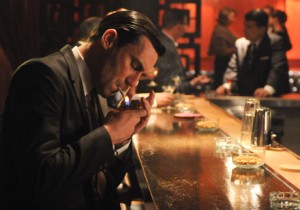 The opening (and instantly recognizable) notes to the 1967 James Bond “You Only Live Twice” theme begins to play as Don passes the prop movie cameras and director’s chair, and he continues past the sight of the rolling camera, disappearing from the scene to the right, and very possibly, from Megan and his old life.

I don’t know about you, but to me that was one of the most powerful and telling pieces of cinema art I’ve ever seen, and it goes on…

The next cut is to Don walking into a dark, smokey bar, the kind that would have been almost “kind of out of date” in the mod and rockin’ world of 1967, a bar strangely similar to the one we first saw Don in back in 1959. He sits at the bar, lights up a cigarette and orders an Old Fashioned, just like he did in that opening scene five seasons ago. Nancy Sinatra’s vocals overlap the scene with the iconic “You only live twice, or so it seems, one life for yourself, and one for your dreams”. Don is back, back to where he was in almost exactly the same scene as we first saw him.

A quick cut to Peggy shows her happy on her first business trip, something that not even a couple of humping mutts (Lyric: “Tame”) in the parking lot could ruin. With a glass of wine in hand, she has arrived. We see Pete, alone, listening to his headphones as the lyric “And love is a stranger who’ll beckon you on”, fitting for Pete. Then Roger…apparently on LSD, alone, naked in front of the window; I was almost afraid he was going to take a nose dive out of it, until I realized the window was shut. The Lyric Nancy sings is “Don’t think of the danger, or the stranger is gone”.

Then we’re back to Don in the bar, approached by a very pretty, very Mod blonde. She’s the 1967 version of what Bettie was in 1957, and the juxtaposition of her 1967 look against Don’s conservative 1959 look is fantastic. She’s hitting on Don, something that would have been pretty uncommon in 1959…and she’s not even asking for herself, she’s asking for her friend…and I think it’s safe to say it’s implied that Don could have them both, if he wanted. She asks, “Are you alone?” and Don contemplates his answer. Nancy sings, “This dream is for you, so pay the price, Make one dream come true, you only live twice.

And it ends, with Don at the bar, smoking his cigarette, drinking his old fashioned, about to give the hot Mod chick his answer…which could go either way, and we won’t find out until next year.

“And love is a stranger who`ll beckon you on, Don`t think of the danger or the stranger is gone, This dream is for you, so pay the price, Make one dream come true, you only live twice.”

What a hell of an ending.

For those of you who thought the episode was “disappointing”, go back now and watch it again. The first 55 minutes tied a few things up. The last 5 minutes were magic.

Here’s the ending, don’t know how long this will be on YouTube, and it’s a little dark, but you get the idea…