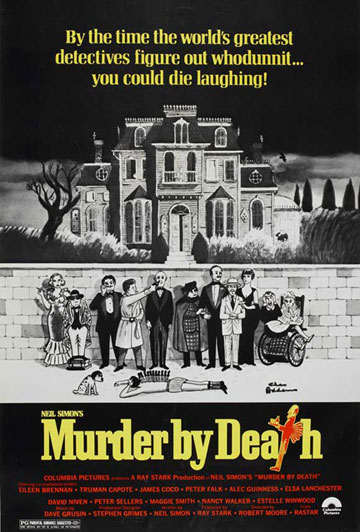 “2-2-Twain”. It’s puns galore in Niel Simon’s hilarious spoof of just about every murder mystery detective of the mid-20th century, the movie that uses more old-time gags and goofy plot devices than a thief has disguises…

There’s no way to tell you much about the storyline without giving it all away…so I’ll give you the basics. Lionel Twain (Capote) invites each of the most famous mystery detectives of all time to “Dinner and a Murder”. With slightly-off names like Sam Diamond and Jessica Marbles, the guests reluctantly come to Twian’s mansion (address: 22 Twain), and are soon treated to exactly what they were invited for…dinner, served by the blind butler (Guinness), and a murder. Yes, Obe Wan is a blind butler, aided by the deaf made (played by Nancy “Rosie” Walker). It’s all about devices.

The lights go out. Someone is stabbed in the back. Rooms change. The moose on the wall talks. People’s clothes disappear. There is thunder and lightning, the bridge is out, and everyone is a suspect. It’s up to the spoofish detectives to overcome their goofy lines and solve the mystery before it’s too late…but will they? Yes, they will. Or will they? 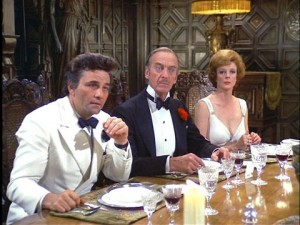 Directed by Robert Moore in a 1940’s Noir style (although it’s in color, which was probably also meant as a joke), Murder by Death is packed full of just about every cliché possible, from the “Milo Perrier” character (aka Poirot) mixing up English and French words: 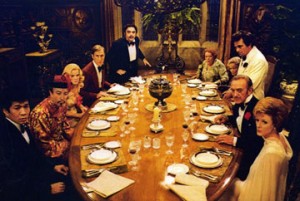 To Sam Diamond talking like Bogie in a BW flick:

Tess Skeffington: There’s nothing on him ’til ’46, when he was picked up in El Paso, Texas, for trying to smuggle a truckload of rich white Americans across the border into Mexico to pick melons.
Sam Diamond : I think we picked ourselves a queer bird, angel.

Because it’s by one of our favorite cats, Niel Simon, the writing is incredibly rich and intelligent, in spite of the crazy wandering and goofy puns. Just when you think the mystery is solved, something else comes along to throw the “Twain” off the tracks (sorry, couldn’t resist). There are more twists than a bag of Twizzlers. All this, plus the fantastic performances from some of old Hollywood’s brightest stars, makes Murder By Death a fun movie to watch any time. 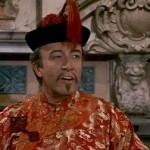 Food & Booze: This is a grand dinner, so go all out – roast turkey, baked ham, the works. Or, serve invisible soup (you’ll see). Vintage cocktails are in order: Martinis, Manhattans, and straight whiskey.

My Take: I first saw this movie in the mid 1980s, then again in the early 1990s. It’s part of what made me decide to start my own murder mystery comedy dinner theater, and to later write Noir murder mystery novels. Even though it’s a spoof, I rank it up there with The Maltese Falcon, The Big Sleep, and Murder on the Orient Express.

-Tiki Chris, reporting from the other dining room at Tiki Lounge Talk.