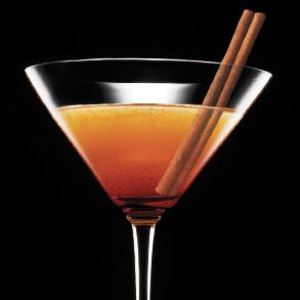 Every year I try to find some cool new drink recipe to feature for Christmas at the Tiki Bar. Last year I shared my own age-old Eggnog recipe, an easy concoction that starts with store-bought nog and goes crazy from there. I’m adding that in at the end of this post, but first here is this year’s featured cocktail,

Throw everything in a shaker with ice and shake it up good. Rim a martini glass lightly with cinnamon, and fill the glass with the chilled booze. Garnish with a cinnamon stick and enjoy the holidays!

Cinnamon Syrup
1 cup sugar
1 cup water
4 cinnamon sticks, broken into large pieces
Bring everything to a boil over medium heat. Reduce heat to medium-low and let simmer for 8-10 minutes until sugar has dissolved, stirring frequently. Let cool. Ditch the cinnamon sticks, strain into a clean glass jar and cover. Store refrigerated for up to two weeks.

There’s nothing worse for kids at Christmas than to watch the adults making special drinks that they aren’t allowed to have. So here’s something that both adults and kiddies will dig…

In a punchbowl, combine the ginger ale, juices, and ice. Add about a teaspoon of cinnamon and a half teaspoon of nutmeg and stir well. Slice oranges into wheels and apples into small cubes and float; sprinkle the top with cinnamon. Serve ice cold with a cinnamon stick. Deee-lish. 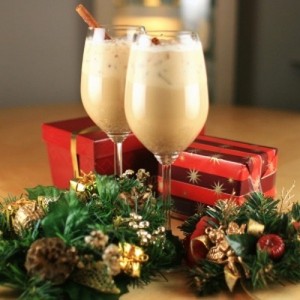 And of course, the infamous Eggnog.

Pour the nog into a large bottle and add all ingredients (start with ½ cup of rum and keep adding to taste). Shake vigorously and chill in the refrigerator for at least two hours before serving.

Hope this helps with your holiday parties! Merry Christmas!