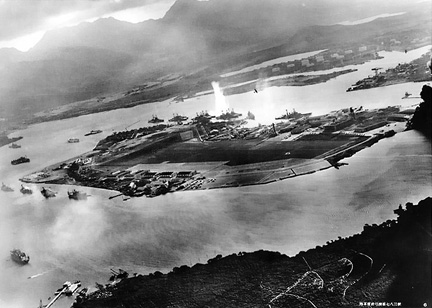 December 7, 1941. To most of us, it seems like a thousand years ago, and at the same time just yesterday. I suppose it depends on how much you realize that infamous day, and World War II, affected our parents and grandparents, and still affects us today. Although it’s true that Hitler was changing the world in Europe, it wasn’t until the Japanese attack on Pearl Harbor forced America full-on into the war. Had Japan not attacked, we may have never committed to the fight in Europe (American sentiment at the time was mostly one of support, but not one of entering England and France’s war). Germany may have conquered all of Europe. It may or may not have conquered Russia, it may or may not have set its sites on the U.S. But one thing is completely clear: The events of the morning of December 7, 1941 allowed the first domino to fall in the chain of events that lead America to become the strongest nation in the world.

On a happier note, there is one very good thing that came out of America’s involvement in World War II: Those soldiers, airmen, marines and sailors who survived the war in the Pacific brought back with them a love of the tropics, palm trees, grass shacks and exotic women…which led to America’s love affair with Polynesian pop and the wonderful world of Tiki.

Here are some video clips that I relate to Pearl Harbor Day, and WW2 in the Pacific general. Take a few minutes and allow yourself to go back in time…