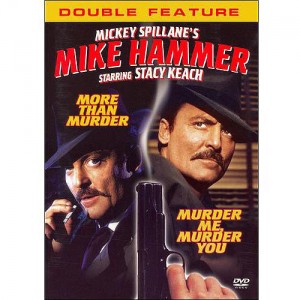 It’s in color, made for TV, and from the ’80s…in spite of all that, this flick is a surprisingly well done, gripping movie with Keach playing Hammer truly like his namesake from  the book. He pulls no punches, and has no qualms about killing the bad guys.

“Murder Me, Murder You,”

The 1980s were not known for the decade’s great Noir movies, and TV murder mysteries of the era were often some of the worst ever made. Consider this flick an exception. With a limited TV budget and Reagan-era censorship, Director Gary Nelson (a seasoned TV & Film director) managed to capture the true essence of Spillane’s style: dark and deadly serious, kept human by a few rays of sarcasm, a few laughs, and some hard liquor.

What makes this movie interesting to people like you and me is that it’s timeless. Mike Hammer is a 1950’s detective, living in the ’80s, driving a ’66 Mustang and listening to music from the ’40s. He talks, dresses and acts like a Noir gumshoe (including Porkpie hat) while fighting off Punk rockers and spandex-wearing muscle-heads.  He carries his army issue .45 (named Betsy, just like in the books) and hangs out in a basement bar that only plays Swing on the Wurlitzer. Yet he’s got modern smarts, and although he runs into trouble with a whiny DA, he doesn’t think twice about beating the pulp out of some scumbags – and always gets away with it.

The Scene: The Art Director and locations manager did a bang-up job picking out “old” looking streets in New York. If it weren’t for the modern cars, this filrm would look like the outdoors were shot in the middle of the century. Don Stroud makes a grew Pat Chambers, Hammer’s friend and connection on the police force. And Tanya Roberts plays a fantastic Velda, sexy and sweet but tough underneath. Her ‘look’ is a lot more ’80s than you might expect, but it works – because Hammer is the only one really pulled from the past.

Ah yes, Hammer. Mike Hammer. Stacy Keach. Big, muscular, and already in his 40s when he shot these movies, Keach plays Hammer closer to the book than any other actor I’ve ever seen, including Spillane himself (No offense, Mickey). He perfectly combines the sarcastic, know-it-all detective with the dark, lonely and murderous killer that lurks beneath. That’s right, killer: In the books, Hammer admits to enjoying killing bad guys. He likes it. He looks forward to it. He admits (to himself) that he’s basically a serial killer who gets off on the thrill of watching someone (who deserves it) die, and found a way to do it legally. He does this very well, without the corniness or silliness that other actors just couldn’t leave alone.

Keach pulls it off like a champ. And the writing, although a little hokey at times (to be expected from an 80s TV movie, I think) really nails the character when it comes down to how Hammer would react to the given situations.

What the movie is about:
Any movie that starts off with two hot chicks getting knocked off the road and crushed and burned to death in their car is going to keep you enthralled. Two female couriers, transporting an important briefcase (contents unknown) are murdered. Mike Hammer is subpoenaed when it turns out his ex-fiance (Chris) is connected to the courier agency (in fact, she is a partner). The big bomb is dropped when it’s revealed that this chick had Hammer’s daughter 19 years earlier. She of course never told him.

Chris dies in the courtroom in Hammer’s arms, and although it looks like a heart attack he knows it’s murder. That’s when the Hammer character from the book kicks in full swing, vowing to avenge her death by killing her killer. He also needs to track down his daughter, and embarks on a journey that takes him through his own past, the pornography business, corrupt businesses and a 1-2 punch ending that will have your head spinning.

Fun stuff: Look for Michelle Phillips (yes, THE Michelle Phillips) and a very young, very sexy Delta Burke with more hair than should be legal on a chick’s head. Also look for Lee Meredith (Ulla from “The Producers”) and Jonathan Banks (that guy who was in a million things and always looked like he was about to fall asleep). 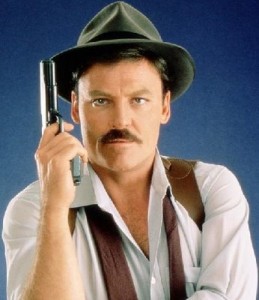 Food & Booze:
This is an easy one. Hammer orders a “Police Special” which, apparently, is a bottle of Jack Daniels in a paper sack. So, yeah. As for food, this a New York movie. Throw together a couple of fat, corned beef sandwiches with slaw and Russian Dressing and a pickle.

Note: The Mike Hammer series and TV movies from the ’80s were great. In the 1990s, Keach revived the series which, I believe, went straight to video. Although still decent, the production value of the later series isn’t as good as the original. Watch the originals first. If you dig them, move on to the 90s episodes.

My Take: Although I was a young teenager when these movies came out, I was already a fan of Spillane, the Hammer novels, and wearing fedoras. Spillane’s writing and Keach’s portrayal of Mike Hammer would highly influence my first works of writing, including my scripts for Stardust Theater in the 90s. Hammer’s character would also influence the main character in my best-selling murder mysteries, “Murder on Tiki Island” and “Murder Behind the Closet Door”: Detective Bill Riggins.

-Tiki Chris reporting from a basement bar with a 1939 Wurlitzer playing “Harlem Nocturn”.