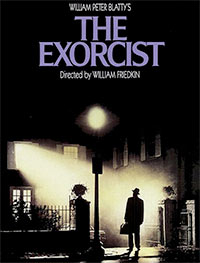 There are some vintage horror movies that are so obviously a “must see” that it seems silly to write about them on a retro blounge, but I will make an exception for The Exorcist. Why? Because it’s THAT GOOD, and if you haven’t seen it, you…well, you must see it.

(Don’t worry…No spoilers, just some references to the things you’ve already seen in pop culture even if you’ve never seen the movie.)

What: The Exorcist is a psychological horror movie centered around a young girl who becomes possessed by a demon. A priest – one who has recently questioned his faith, is asked to help the girl. At first he believes her outbursts and episodes are psychotic. Then he sees her head twist all the way around and it’s full steam ahead from their.

That’s the story in a nutshell, but not the reason to watch this flick. Reasons to watch it include the fact that it was the first mainstream horror movie to realistically show a child possessed by a demon, cursing, convulsing, spewing green vomit in the face of a priest. Where most horror movies of the time (or before) relied on monsters, ghosts, or murderers for effect, this movie took an entirely realistic approach to horror, capitalizing on an evil you never really even see (as it is manifested in the girl). Remember, movie-goers in 1973 weren’t used to much cursing, blood or psychological horror. They were used to Hammer films with Christopher Lee as Dracula (although great, not on the same level as this) and had just recently been exposed to Night of the Living Dead, which was shot in black and white. Now audiences were seeing a child turn into a demon, in full color, cursing like the devil himself, acting out in horrific ways (I don’t want to give them away) with brutality and absolute…well, horror. To this day, this movie remains one of the most difficult to watch because of its realism.

Why: Where as movies like The Woman in Black are creepy, Paranormal Activity is jump-out-of-your-skin scary, and House of 1000 Corpses is grossly bloody and nerve-shredding, The Exorcist is all of those combined. The cinematography is impeccable, creating an atmosphere of mental anguish and unease that sucks you in and keeps you there. The acting is, of course, incredible, and some of the reactions were real – including the reaction by Father Karras when he gets pelted in the face with vomit (it was supposed to hit his chest!). The movie is a masterpiece of suspense and horror, period.

Beyond that, it’s hailed as one of (and often the) best movies of all time. Adjusted for inflation, it is Warner Bros’ highest grossing movie of all time.

My Take: I’ve seen this move at least two dozen times. I first saw it when I was around 12, edited for TV, and even with the cursing and the more explicit scenes cut it still left a last impression. When I saw it uncut as a teenager, I found myself twinging during the scene with the girl and the cross (won’t spoil it here) and still do today. The “version you’ve never seen” that was re-released a few years ago adds a few scenes that make the movie even sicker.

Food and Booze: I usually give recommendations for dinner with your movie, but for this one, forget it. You won’t be able to keep anything down. If anything, have some pea soup.