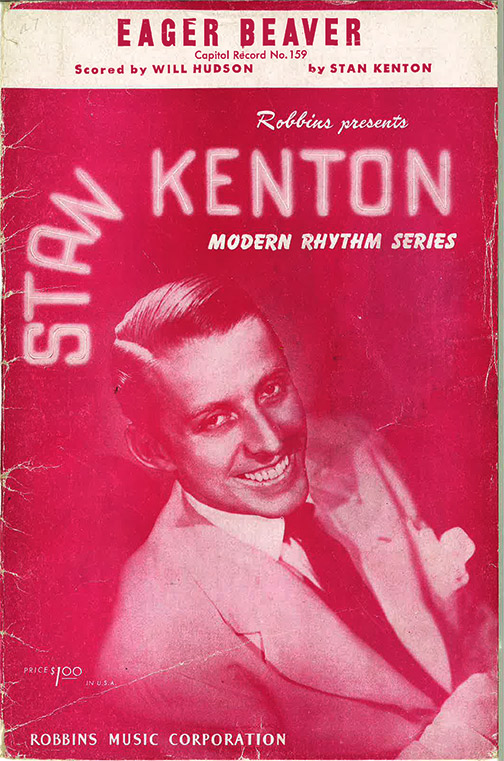 Swing back to a rehearsal hall in New York City, 1943. Those words, or something close to them were very probably spoken by the young bandleader as he coaxed his musicians into playing the lilting, modulating melody with a silky smooth finesse that would become part of the band’s signature style. The tune: Eager Beaver. The band: Artistry in Rhythm. The leader: Stan Kenton.

“Eager Beaver” was a sophisticated, swinging “riff tune” that featured Kenton on solo piano, engulfed in a true jazz orchestration that set the band apart from the traditional big band sounds of Miller, Dorsey, Shaw and Goodman. It was a hit – Kenton’s first big one – with growling tenor sax solo by Red Dorris and a crazy, loud and high-reaching trumpet section. The song would become so popular that it would be part of the Kenton songbook until his death in 1979. A sleeker, cleaner, definitive version was recorded in 1956 featuring Maynard Ferguson leading those high trumpet notes, and Vido Musso laying down the swingin’ tenor solo.

“Eager Beaver” laid the roots for Kenton’s “Progressive Jazz” style. Kenton and the band’s style was influential among musicians in the modern jazz, bop, west coast jazz and other styles that were forming in the 1950s, ’60s and ’70s. While Kenton’s style and sound progressed, Eager Beaver remained an important and steady chart in the Kenton library.

One of the things that always intrigued me about this tune was how flawlessly the arrangement combines the sounds of the saxes, trumpets and bones against a solid rhythm section. But the big things for me are 1) the tenor solo, and 2) the modulating ending.

The tenor sax solo was kick-ass before the term kick-ass was coined. The 1943 tenor sax solo had a growling, modern sound that was at least 10 years ahead of its time, forming the basics of what would become the Rhythm & Blues – and then Rock ’n’ Roll sounds of the 1950s sax players. The 1956 version by Vido Musso went a step further, being cleaner, more sophisticated and unique in tone and composition.

Now, the ending, that’s another thing altogether. As a young musician I tried desperately to get a copy of the arrangement to see how the modulations were written. But this was back in the 1980s, before the world was laid at our fingertips with the World Wide Web. I tried like hell to figure it out by ear, but it was beyond my ability.

A few weeks ago, on a whim, out of the blue, I typed “Stan Kenton Eager Beaver” into the eBay search box. Hot damn, Sam…this arrangement featured here came up for sale, cheap. I got it, of course.

Those of you who can read music can check out the Tenor and Alto sheets below. You can see how each verse at the end steps up, integrating with the next verse in such a fantabulous way that that the listener doesn’t even realize what is happening…they just know they are hearing something cool.

For those of you who don’t follow sticks (notes), the best way I can explain what’s happening is that at the end, the melody “steps up” a note each verse, but in such a way that the last note of the first verse becomes blends in with the second, stepped up verse so you don’t even realize there’s been a modulation. Crazy, sophisticated jazz, man.

Below are two videos of the riff. The first is a “soundy” from the early 1940s, giving you an idea of the original version of the song (it sounds like it’s been sped up a little in the video.) The second is the 1956 version, clean and cool, much closer to the way Kenton would have sounded live.

The 1956 version of Eager Beaver

Below here are the sheet music pages from the 1944 Robins Music arrangement. Follow along with the saxes at the end to dig the modulation. 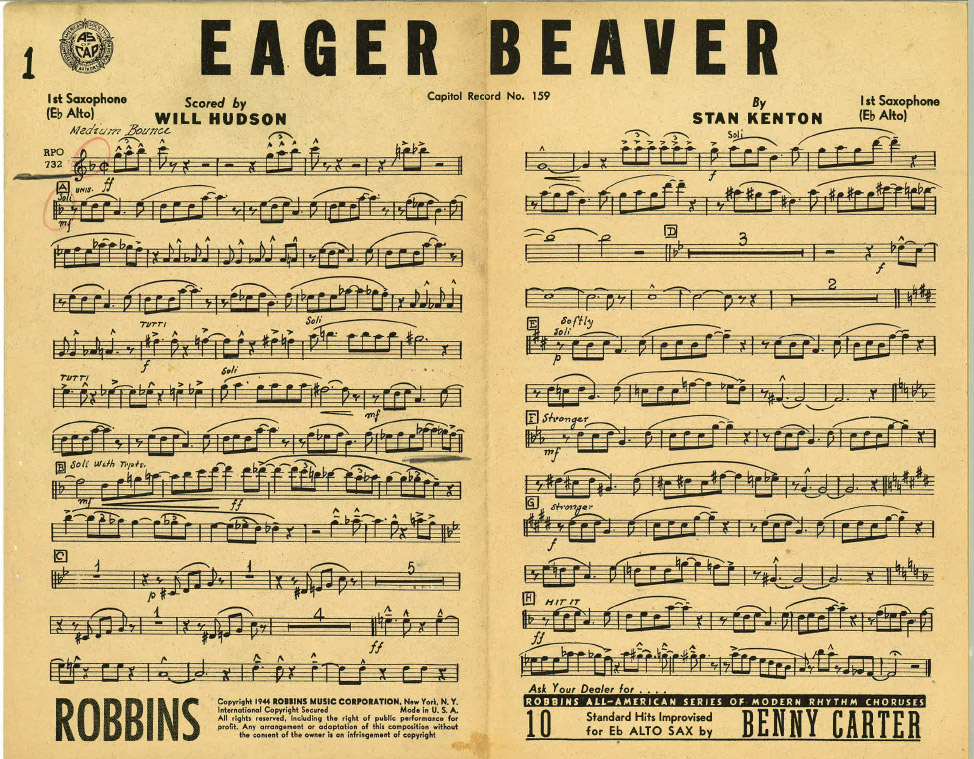 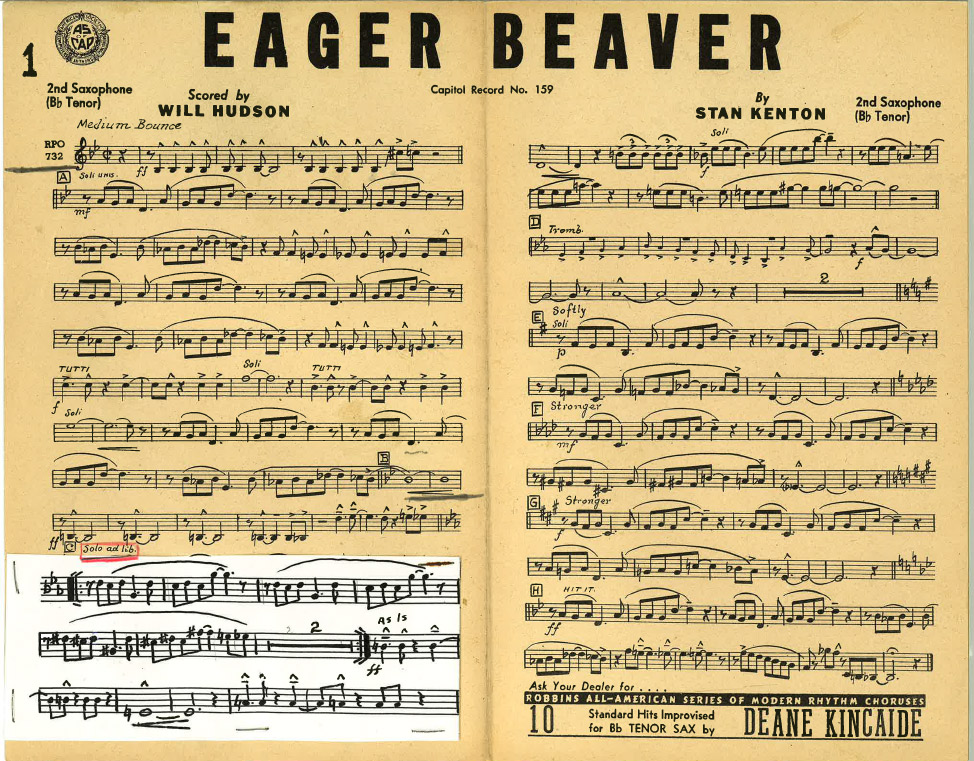 You can see that his sheet music was well used; someone even added their own section at the tenor sax solo (underneath are the chord progressions for the tenor solo).

This sheet music is also great because it features several ads to buy more sheet music. Talk about a captive audience! 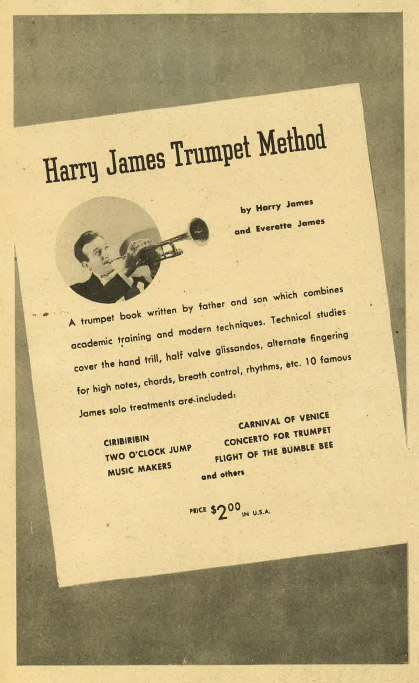 There seems to be a cocktail recipe for every song title ever recorded. Eager Beaver has not been spared, but the recipe is kind of dull compared to the complexity of the song (It’s also probable that the cocktail was invented independently of the song, and refers to the person eager to complete a task, or a chick who is hot to trot, which no doubt is whom the song is named after.)

Mix everything together in a shaker with ice; shake and pour over cubes in a highball glass. To “jazz it up” a bit, use spiced rum, and garnish with an orange slice and cherry. Good stuff.

Well, I hope you enjoyed this jazzy trip down a road that doesn’t get nearly as much travel as it should. I hope I opened some of you up to a cool tune that was recorded at the very start of the modern jazz era, and that it will inspire you to check out more by the master musician, Stan Kenton.