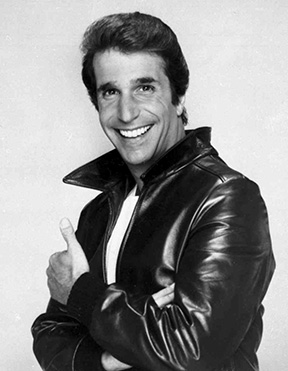 “Happy Days” first aired in 1974. It took place in the mid 1950s, about 20 years earlier. The nostalgia centered around the “good old days” when big fins, Rock n Roll, drive in diners and poodle skirts defined America. It was an homage to a happy-go-lucky time in America’s history (if you ignore Korea, Vietnam, the Cold War and segregation), a time best remembered for pink and black motifs, big fast cars, cool dudes and hot chicks. It was also the era of modern architecture, cool jazz and cocktails, but those elements rarely made it into this mainstream-pop TV show.

The Fonz was an icon, but also an enigma: A street-tough, greaser/biker who was into fast cars (and faster women), yet was also an intelligent, fairly well spoken and surprisingly respectful adult. Google how and why that character evolved, there are some interesting stories behind it.

Now to blow your minds…

– “Happy Days” premiered FORTY YEARS AGO. It’s theme song was “Rock Around The Clock”, then was changed to “Happy Days” later.

– If this show were to be made today, it would be reminiscing back to 60 years ago. Which means a 60-year-back nostalgia show at the time Happy Days premiered would have been about World War One.

Also if this show were made today:

– The Fonz would look like Kurt Cobain, Potsy and Ralph would be dressed in grunge, and Richie would dress like Chandler on Friends (Which, by the way, came out in 1994)

– Instead of jalopies, the kids would be driving 1980s Honda Civics Ford Tauruses.

– The Fonz would work at a Jiffy Lube.

– Richie’s dad wouldn’t own a hardware store, as it would have been put out of business by the big-box stores. He’d be an assistant manager at one of them, using a third of his paycheck to pay off his debts after being driven out of business. Richie would go to community college on a Pell grant. 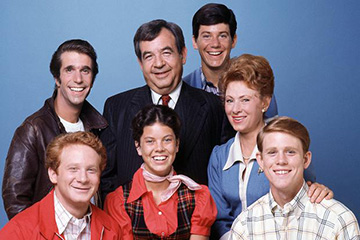 – Laverne and Shirley would have hung out at night clubs a lot. They probably would have done a lot of drugs, too.

– And last but not least, instead of singing “I found my thrill on Blueberry Hill,” Richie would go around singing “Whoomp, There It Is!”

-Tiki Chris reporting from the TV room at Tiki Lounge Talk. If you dig the 1950s, check out one of my Detective Bill Riggins mystery books, all of which take place or flash back to the Decade of Pink Dreams.