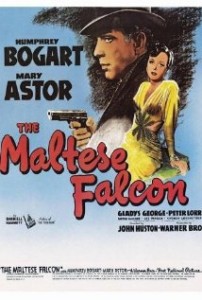 75 years ago, John Huston unleashed onto an unsuspecting public a film that would become one of, if not the most iconic gumshoe detective mystery movies of all time, The Maltese Falcon.
You can’t utter the words “Film Noir” without The Maltese Falcon coming to mind. From Bogart’s portrayal of ‎Dashiell Hammett’s Sam Spade, to the multiple twists and turns, to the bitter ending, this slice of the dark side of peoples’ lives has become the standard by which all other films of its kind are measured.

And now it’s back on the Silver Screen, in glorious black and white, for its 75th anniversary. Now that’s the stuff that dreams are made of.

Click here for showtimes, locations and tickets through Fathom Events.

Click here for the Tiki Lounge Talk’s take on The Maltese Falcon for Noir Movie Monday.