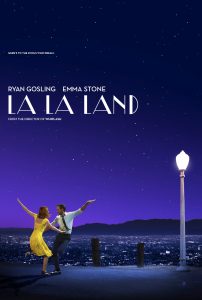 If you haven’t seen it, you’re probably thinking, “So what’s all the fuss about?”

Answer: Beautiful cinematography, great story, fantastic acting and direction, incredible music; From the moody jazz clubs to the brightly-costumed dance numbers, everything about this movie screams the things we love. Fred and Ginger would have been right at home making this picture. 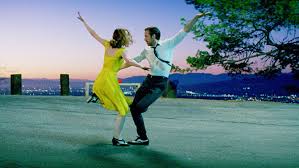 As my title says, this is a story set in modern-day LA, but is really a 1940s-1950s style musical, complete with traditional-sounding show tunes, dancing, and vintage décor. The music is incredible, featuring big band sounds, traditional jazz and modern influences blended together like a perfect musical cocktail. 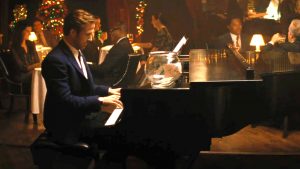 Then there is the cinematography. Oh, how beautifully and carefully this atmospheric movie is filmed, each shot creating a specific mood while maintaining the vintage-esque feel throughout. Dreamy and cool, there’s a touch of magic…just as a 1940s musical should have. (For example, they say every jazz piece tells a story; in this movie, the jazz piano piece literally tells a story. Very cool.)

Beyond the music, the acting and the story are fantastic. Stone and Gosling effortlessly take characters who should be un-relatable to most people (an aspiring young actress and a bohemian jazz musician) and make them warm and inviting, even with their faults. The blossoming romance is real, corny, and magical all at the same time.

For people who dig vintage and mid-century fun, this a movie that is right up your alley.

The film has an overall Art Deco, Vintage & Mid-Century look and feel. Sets and locations are all about the past, including the Angels Flight Funicular Railway, The Colorado Street Bridge, and the very famous Griffith Observatory (the Planetarium in “Rebel Without A Cause”).

The tap dancing and jazz numbers (Gosling learned jazz piano for this role) take you back to the decades of the 1930s, ’40s and ’50s, perfectly choreographed and played for this vintage musical style. The music was scored for a 90-piece orchestra on the same stage as “Singin’ in the Rain”.

Gosling’s character, Sebastian, is a jazz transplant from the late 1950s, right down to his thin ties and choice of classic style cars (an early 1980s Rivera convertible at first, a 1980 Cadillac Eldorado convertible near the end). He is the symbol of tradition, of the past, to a fault – his career as a jazz musician is hampered by his unwillingness to change with the times. Once he begrudgingly evolves musically, opportunities begin to open for him.

Stone’s character, Mia, is a modern woman who seems at odds in the modern world (even though she doesn’t realize it). She has problems with modern electronics and doesn’t do well in scenes that involve her Prius. Yet she seems most at home in the vintage settings she discovers (the jazz clubs, period piece performances) and with the vintage-style man she keeps running into. It’s only when she embraces the past that she becomes successful.

Together, these marvelous characters both sing and dance though life in the style that made Fred and Ginger famous.

Personally, I think Fred and Ginger would love it.
And I think you will too.