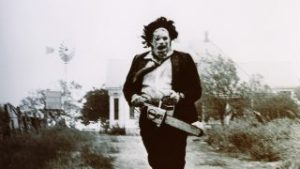 Luckily for us, over the years some local art house theaters showed some of the best…lucky, if you were lucky enough to live near one. For most of my life the best I could hope for was a midnight showing of The Rocky Horror Picture Show, although in the 90’s I did get to see Casablanca at the local 4-screen cinema, and Dracula vs. Frankenstein at an Art House. 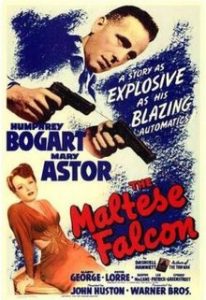 Now, between Fathom Events doing special viewings at out local multi-plex, and multiple art houses doing special engagements, I’ve been lucky enough to catch some great ones…and some not so great but really fun ones.

In the past two years I FINALLY got to see The Shining on the big screen…Raiders of the Lost Ark again…The Maltese Falcon…and more recently Killer Clowns from Outer Space. Not all from the mid-century era, I know, but still cool.

Tonight we are going to see one of my top favorite movies of all time…The Texas Chainsaw Massacre, the original from 1974. It’s part of the Popcorn Fright Nights Film Festival being held at Savor Cinema, aka/previously Cinema Paradiso in Fort Lauderdale, FL. In a wonderful tribute to the theme of the movie, they are including a BBQ dinner. I’m not asking what kind of meat it is.

It may seem odd to consider “Chainsaw” to be an old movie. But when you think about it…Maltese Falcon is from 1941…which means Falcon was only 33 years old when Chainsaw came out…and Chainsaw, at the time of this writing, came out 44 years ago! Mind blown yet?

What’s the big deal about The Texas Chainsaw Massacre? 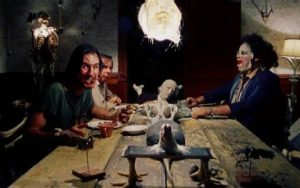 When I was a kid, the movie was already a legend. This was before VHS or cable, so the only way to see old movies was on TV. And this movie, as far as I know, NEVER made it to TV. It was talked about as being so violent, so gory, that it had been banned in several countries (this turned out to be true). So kids like us never got to see it, at all.

Then HBO came along in the 1980s, along with video tape rentals. I got to see The Shining for the first time on HBO (and it screwed with my head for years). Then I finally got to rent Chainsaw as a teenager. I was not disappointed. Not only was it a good horror movie, it was just insane. The way it was filmed, the art direction, everything about this movie was so different from Freddie and Jason and Micheal, so gritty and a REAL. Disturbingly real. The low-budget only affected the quality in so much as it made it more realistic, more insane.

Some of the things that stood out to me, that made the film really stand out and enjoyable:

2 Replies to “Watching Old Movies on the Big Screen: The Texas Chainsaw Massacre”