If you’re into old movies, I don’t have to spiel about the wonders of the original Dracula, Frankenstein & Wolf Man. You’ve probably seen them, or they’re already on your list. So here’s a few creepy flicks that may have escaped your radar…some you’ve heard of, but maybe never got around to witness. Some you’ve probably never heard of, but take it from this kat, they’re fun to watch and might even give you the heebee-geebees. I’ve included the IMDB link so you can get more info. So here goes, in no particular odor (I mean order. Damned spellchecker.) 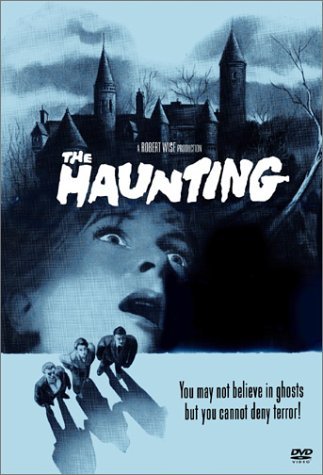 One of the first ghost stories I ever saw as a kid, this black & white thriller sets three unsuspecting volunteers in a secluded, creepy mansion with a scientist conducting an experiment on sleep deprivation. Secretly the well-intended scientist believes the mansion to harbor spirits, and his volunteers have been selected for their apparent sensitivity to the spirit world. The spirits come. It’s krazy. A well-crafted movie from a well-written book, you’ll want to watch this one with the lights off and some spiked hot chocolate.

The Uninvited (1944) http://www.imdb.com/title/tt0037415/
Ray Milland leads this Noir thriller centering around a haunted house on the English coast. He and his sister move into the lovely old home only to find there are skeletons lurking in every closet. A well-written and well-acted movie, this one is at the top of my ghost movie list.

Stanley Kubrick’s The Shining (1980) http://www.imdb.com/title/tt0081505/
Jack Nicholson at his craziest/finest. Stephen King may have hated this adaptation, but there’s no denying this is one of the creepiest, scariest, most disturbing movies ever made. From blood pouring out of the elevators to butchered children to eerie music from a not so distant past, The Shining will leave you with chills and craving for more. The sets of the Overlook Hotel are so evil and creepy looking that the hotel itself becomes one of the main characters (as intended). Even the opening credits are scary!

A Bucket of Blood (1959) http://www.imdb.com/title/tt0052655/
Beatniks, jazz, pretty girls and ‘innocently’ unintentional murder for the sake of art. This early Roger Corman film is as dark as dark comedy can get. Creepy, BW & even an actual bucket with blood in it. This is one of those movies where you’ll be saying “They got away with THAT in 1959?” 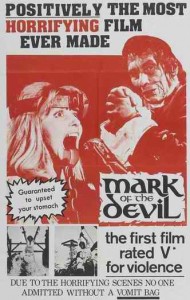 Mark of the Devil (1970) (aka Hexen bis aufs Blut gequält) http://www.imdb.com/title/tt0065491/
Hot 60’s European chicks getting tortured as witches. Amazingly realistic and gory for the time, the plot centers around Inquisitors using their power to satisfy their sadistic lusts. Pretty damned disturbing, actually. The American version is dubbed pretty well, so you don’t have to read subtitles. Lots of torture devices, dirty villagers, and torture of pretty medieval women that borders on a snuff flick. Don’t let the kids near this one.

Young Frankenstein (1974) http://www.imdb.com/title/tt0072431/
It’s not easy to pull off a really great spoof of a really great movie, but they really nailed it with this one. Mel Brooks in his heyday with Harvey Korman, Peter Boyal, Marty Feldman, Cloris Leachman, Teri Garr, Madeline Kahn, a cameo by Gene Hackman and Gene Wilder at the reins. Wilder plays the grandson of Victor von Frankenstein. He refuses to believe his grandfather’s work had any merit until he visits the ‘old country’ and finds his journal. When he decides to try the experiments himself, hilarity ensues. Shot in black and white with the same techniques as movies from the 30’s (and with some of the same sets as the original “Frankenstein”) this flick is timeless, with great gags, great writing, and Teri Garr looking like a real honey.

Speaks for itself. If you ain’t seen it, see it. It’ll blow your mind. Scary, evil, disturbing. Interesting note: Max von Sydow played Father Merrin, the old priest. He was only 43 at the time. He also played the role of Jesus in The Greatest Story Ever Told (1965), and Director Burgess in Minority Report (2002). Talk about a career! 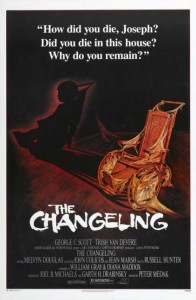 The Changeling (1980) http://www.imdb.com/title/tt0080516/
Probably the best Ghost Story I’ve ever seen on film. George C. Scott stars as John Russell, a music composer who moves to a secluded vintage mansion outside of Seattle, hoping for some peace and quiet. What he gets are strange noises, visions, and visitations. As he unravels the mystery he gets drawn deeper into the web of the strengthening spirit. I don’t want to give anything else away! This has been one of my favorites from when I first saw it as a kid. Even though it was released in 1980, it has that old 60’s-70’s production style that makes it even creepier than any of the newer flicks can go for. Sure, new movies have great effects, but when they’re too slick they just don’t have that gritty creep factor.

Ghost Story (1981) http://www.imdb.com/title/tt0082449/
What happens when you get Fred Astaire, Melvyn Douglas, Douglas Fairbanks and John Houseman together in their retirement years? A very creepy ghost story, that’s what. Add Patricia Neal, Alice Krige and a 50 year old bloody secret and you’ve got the makings of a very spooky film. 80’s production values are laughable, but if you can get past that it’s a fun flick to watch. 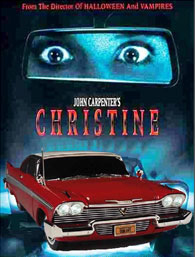 Christine (1983) http://www.imdb.com/title/tt0085333/
“She’s Death On Wheels” was the movie’s slogan. Another Stephen King adaptation, this time by John Carpenter. Nerdy teenager finds a beat to hell ’58 Fury “That’s uglier than he is”, spends all his time fixing it up and driving it, all the time becoming possessed by the demon car. It follows the book fairly well, but the way Carpenter translated the story to the screen has become legend. There’s even a Christine Car Club dedicated to restoring and preserving ’58 Plymouth Fury Christine clones (and a few real movie cars). With no computer graphics to help them, 25 Plymouths were used in the film, with about 15 of them being destroyed (which brought car guys like me to tears). It was later said that many of the destroyed cars were junkyard dogs anyway, didn’t run, didn’t even have engines, and were just painted rustbuckets used for the shots. A little Trivia: When my family and I went to see this in the movies around Christmas, 1983, we drove to the theater in my father’s ’64 Caddy. When we came out, people were pointing at his finned car and yelling, “It’s Christine!”…even though it was powder blue and didn’t look anything like a Fury! A few years later my Dad and I bought a ’59 Plymouth Savoy (with a ’58 front end on it) with the intention of making a Christine Clone. Turns out the motor was shot, and it was too much trouble to do it so we sold it back to the guy we bought it from for the same $200 we paid for it.