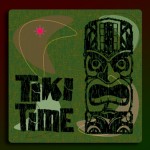 July in South Florida can be many things. It can be cool and breezy, wet and rainy with the sun shining through the clouds, or hot and muggy like an old Tennessee Williams scene.

Tonight has Williams all over it. Heavy, humid air, hanging wet, scented of the rain forest. Heat lightning shining up the Eastern sky. The sounds of night creatures…frogs, crickets, night birds, cutting a swath through the thick night air.

Perfect night for a cocktail at the Tiki Bar.

The vintage bar is outside on the lanai, next to the pool. It’s damned hot out there, but a Crown and Ginger Ale fixes that quick (Surprising how refreshing that combo can be). I sit at the bar, contemplating the 50’s style designs I’ve painted on the bamboo backdrops. Paintings of exotic cocktails. Cartoon faces smiling with intoxication. Tropical flowers. Everything is lit with blacklight, helping to pull me back to a time forgotten by most, but not by m

As I sip the drink and look over the vintage bottles and Tiki trinkets, I start to get that feeling…that feel, the one that tells you time no longer exists, it’s only in our minds, and our reality is what we decide it is. My reality races away from the present, and lands me somewhere in the middle of the last century. Les Baxter music plays softly, not from the CD player but from a 45 on a hidden jukebox. The bottles of Crown and Captain turn into Canadian Club and Seagram’s Seven. Even the air feels different…still muggy, but with a distinct hint of kool.

I take a sip of the drink, built just right with plenty of ice to keep me from melting. My eyes roll over the black velvet paintings of tropical islands and hula girls, and I get that buzzing in my head that tells me I’m floating back to another era, another existence. The jungle drums fill my eardrums and I sway with the sounds and the heat and the booze. Maybe that’s it, maybe this feeling is just too many highballs (or not enough). Whatever it is, I’m there, for that moment, I’ve transgressed time and landed in the glory days of cool jazz and Polynesian Pop, that magical time when calling a woman a doll was a compliment and Frank Sinatra was king of the universe. When a flashy car meant plenty of chrome and big white wall tires. When a buck-fifty could get you a decent steak and a Manhattan, and the really good movies were still being made in black and white.

Then I hear something, a buzzing like a sick chainsaw…a car on the street…it sounds like a souped-up lawnmower, some kid in a Civic who thinks he’s cool but has no idea how dorky he really is. Suddenly I’m ripped ahead in time again, thrown back to now, back to July 2009.

The Crown is sitting on the bar again, the CC gone. The air shifts back to normal. I finish the last few sips of my highball and head inside to type this riff on my iMac computer, already a “vintage” model at four years old. In the library, I’m surrounded by memories of the past…a 1955 Marilyn Monroe calendar, Original Glenn Miller and

Martin Denny albums, old books, antique toy cars…but the computer and the TV and the cell phone tell me no matter how many times I feel that feeling, almost get back in time, I will always return to the present.

But it’s nice to know those times are only a cocktail away.

2 Replies to “A Hot Summer Evening at the Tiki Bar”